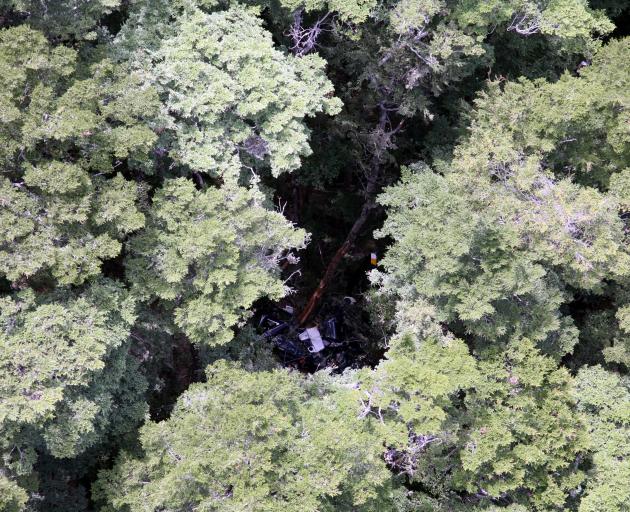 The site of the crash in the Lochy River basin in the Eyre Mountains, southwest of Queenstown. Photo: NZ Police
A Robinson R44 helicopter "fell apart in midair" on a perfect day for flying, a coronial inquest in Queenstown was told yesterday.

All helicopters were vulnerable to "mast bump" events, but the R44 particularly so, counsel Garth Gallaway told coroner Alexandra Cunninghame.

When it occurred, it had "catastrophic effects", with R44 crashes responsible for numerous deaths in New Zealand and throughout the world, Mr Gallaway said.

James Patterson Gardner (18), of Queenstown, and Wanaka pilot Stephen Combe (42), died when their helicopter broke up in midair during a training flight while over the Lochy River valley southwest of Queenstown on February 19, 2015.

They were employees of Queenstown company Over the Top, which operated the helicopter.

Mr Patterson Gardner was the son of the company’s chief executive, Louisa Patterson.

In its report on the crash released in 2016, the Transport Accident Investigation Commission (TAIC) identified mast bumping, which caused the rotor blade to hit the cabin, as the cause.

The report said many other fatal mast bump accidents involving Robinson helicopters in New Zealand and around the world were "largely unexplained".

Mr Gallaway, Ms Patterson’s legal counsel, said had the two men been flying a different make of helicopter, "they would still be here today".

That the Robinson Helicopter Company had chosen not to take part in the inquest was "an indictment on the organisation, and speaks for itself".

Mr Combe was a highly experienced training pilot having more than 4500 hours in helicopters and nearly 1000 hours in R44s, while Mr Patterson Gardner was an "eminently sensible student beyond his years".

They were the 17th and 18th fatalities from R44 crashes in New Zealand, he said.

Cecil Peak Station manager Philip Rive said he was mustering sheep when he saw the R44 flying towards the station across Lake Wakatipu.

A short time later he received a phone call from Mr Combe, whom he had taken flying lessons with previously, who apologised for spooking the sheep.

After later being informed the aircraft was missing, he drove up the valley towards the sound of searching aircraft, and came across the crash site.

Among several people already there was Ms Patterson, who asked him: "What the hell has gone on here Philip?"

He helped carry the bodies of the two men to his ute, and drove them to a clearing where they were loaded into a helicopter and taken to Queenstown.

In a tribute to her only child, Ms Patterson said he was her "baby" and best friend.

For her and her son’s father, Murray Gardner, he was "the light of our lives".

He was an "intelligent, caring and beautiful boy" who was going to begin an engineering degree at Sydney University the next day.

For an aircraft to break up in flight without a known cause was not acceptable, she said.

"No other aircraft type has these atrocious statistics."

A total of 13 witnesses are expected to give evidence during the inquest, which has been set down for two weeks.