It’s taken a Northern Irishman to restore one of the Whakatipu Basin’s oldest buildings.

In 2019, builder John Hudson, who shifted to Queenstown in 2011, bought a 4803 square metre section at Shotover Country that included the dilapidated Hicks Cottage, which farmer Thomas Hicks built sometime between the mid-1860s and mid-1870s, shortly after the Basin was first settled.

A category 3-listed heritage feature in the council’s district plan, "it had been in an  absolutely terrible condition for a long time".

Its most historically-significant feature, he notes, is its timber shingles roof, "which usually denotes a building that’s pre sort of 1875". 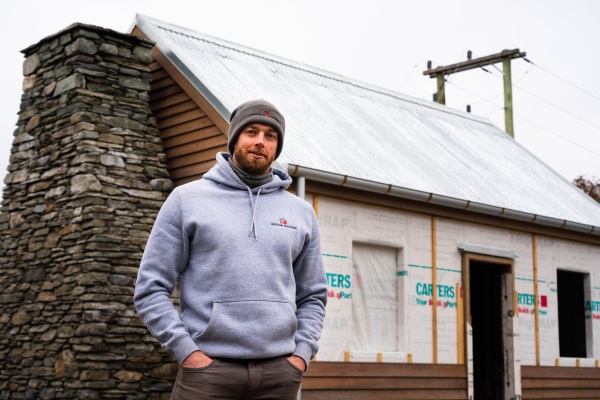 Builder John Hudson by the formerly-dilapidated Hicks Cottage he and his team are restoring. Photo: Mountain Scene
It had been protected by an old corrugated iron roof over it.

Other special features were a large, crumbling rubble stone-built chimney and mortice and tenon joints in its framing.

Despite its derelict state, Hudson says he was keen to "restore it to its natural glory" and  also "have a piece of the history of Queenstown".

"I knew exactly the challenge."

After first building a large home which, thanks to architect Jessie Sutherland, from Cromwell’s SA Studio, incorporates design features from Hicks Cottage, Hudson and his team of three builders started on the restoration project a few months ago.

The entire roof was Hiabed off and placed on concrete blocks.

A new iron roof, with hydrochloric acid on it, to dull it down, was built over the old roof, then Hiabed back into place with new frames. 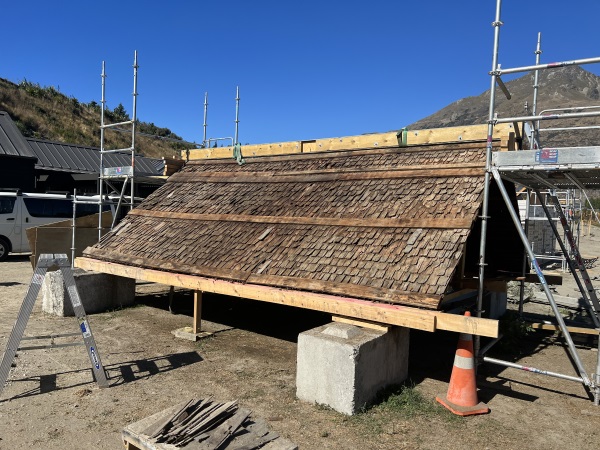 The original timber shingles roof was taken off and a new iron roof was placed over it. Photo: Mountain Scene
A new concrete pad over insulated foundations was laid — "we raised it a small bit to bring it up to [building] code", Hudson says.

New cedar weather boards are going on the exterior, while the inside will be clad with some old beech sarking fortuitously found on a neighbouring property.

The front door and window frames — one replicating the sole original one — went in this week.

Including landscaping, he expects it to be finished by November.

Though on the fringe of Shotover Country, it’s highly visible as it’s right by a section of  Queenstown Trails Trust trail, near Old School Rd.

Subject to consent, Hudson thinks he’ll turn it into Airbnb accommodation, "to open it up to the public".

Having built a number of Shotover Country houses, Hudson says restoring Hicks Cottage is "like the reward at the end of it".