By Matthew Mckew
0 Comments
A fire ripped through a house in Queenstown yesterday, leaving all but the garage gutted.

Seven crews from across the Lakes area responded to the emergency off Tucker Beach Rd.

Neighbour David Hay alerted the fire service about 5.45am, after spotting the flames from his window.

Mr Hay said he had woken up to get a drink of water and saw a "red glow" behind the curtain.

A Fenz firefighter checks on the remains of a house, off Tucker Beach Rd, in Queenstown, which was destroyed by fire on Monday morning. PHOTOS: MATTHEW MCKEW
"I went to have a look and could see flames coming from the bottom of the garden."

He called 111, while his wife and daughter rushed with blankets to help anybody inside.

Fortunately, the owners were away on holiday, but it is understood three people were in the detached cottage next to the house.

Helen Hay described how "flames engulfed the entire house" and said "it was frightening" how quickly the fire took hold.

Both praised firefighters for their response but said there was little they could have done to save the house.

Seven crews attended, including three pumps from Queenstown, one from Frankton and one Arrowtown.

Other support vehicles also arrived and a fire command unit from Alexandra were put on standby.

"On arrival we found a single-storey residential dwelling well on fire.

"There were no injuries as a result of the fire and all persons were accounted for." 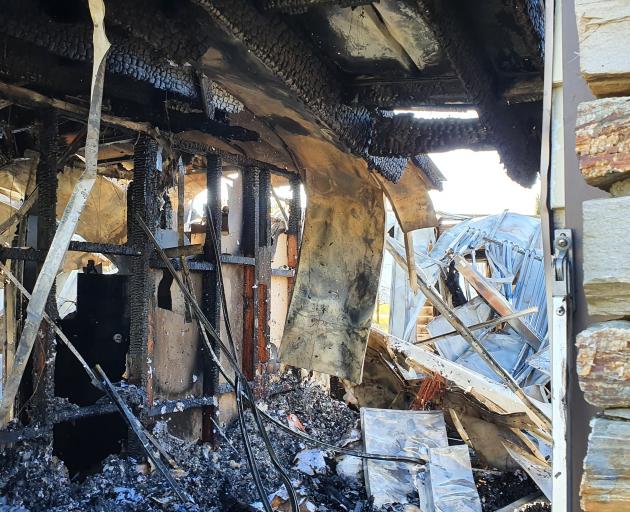 The fire was not believed suspicious and an investigation was being carried out.

Firefighters extinguished the blaze by 8.30am, but it was "contained well before then".

The crews on the scene managed to prevent the fire from spreading to the garage, but Mrs Hays said ash had littered their garden and it was fortunate there had been no further fires.