Fresh water ecologist Dr Marc Schallenberg told an audience in Queenstown this week that the continuing spread of lake snot in the region was finally getting the attention of local and regional policymakers. 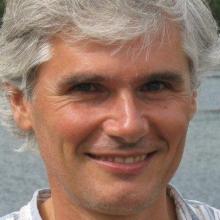 Marc Schallenberg.
But funding for research into the phenomenon had yet to materialise, he told the 40-strong audience at the Catalyst Trust event.

"I’ve been trying for a long time to get funding to work on this, and haven’t succeeded yet."

Lake snot is the latest ugly name in a line-up of pests — after didymo and lagarosiphon — causing concern about the health of our lakes.

First noticed by fishermen in Lake Wanaka about 2004, it is produced by a microscopic algae — known as Lindavia intermedia or Cyclotella bodanica — that appears to have been present in many Central Otago lakes for more than a decade.

Dr Schallenberg said that for reasons not fully known, the algae was spreading and proliferating to the point where lake snot was beginning to cause a nuisance.

Although there was no evidence it was harmful to humans, it was clogging home and business water filters  in Wanaka and Queenstown, coating anglers’ lines and lures with slime  and  making a swim an unpleasant experience in parts of Lake Wanaka.

The discovery of lake snot in Lakes Wakatipu and Hawea this year, as well as in Canterbury’s Lake Coleridge, meant it could now be described as a "national problem", he said.

The Lindavia algae was known to be present in Lake Hayes and Moke Lake, although neither had a lake snot problem.

It remained uncertain whether it  was a "recent exotic invader" to New Zealand or occurred here naturally.

Following pleas from groups such as the Guardians of Lake Wanaka and Otago Fish & Game, lake snot is gradually appearing on the radars of the Ministry of Primary Industries, the Otago Regional Council (ORC) and the Queenstown Lakes District Council (QLDC).

Its technical committee will hold a workshop on lake snot next month at which researchers like Dr Schallenberg have been invited to speak, and will consider funding requirements and options early next year.

Meanwhile, concerned about the clogging of water filters in Wanaka and Queenstown, the QLDC is trialling a treatment system to reduce the impact of lake snot.

The council will discuss the issue with hoteliers next week, and will hold  public meetings in Queenstown and Wanaka on December 14.

Key issues were the links between the spread of didymo and Lindavia in Central Otago lakes, the relationship between lake snot and farming nutrients and the potential for treatment and sanitation to reduce its spread between lakes.

A new, multidisciplinary group of 40 University of Otago researchers, called Catchments  Otago,  was preparing a funding application for a major research project to the Ministry of Business, Innovation and Employment, he said.

Focusing on the "Southern Great Lakes" and their catchments, a successful multimillion-dollar bid would allow researchers like himself to learn far more about the algae.

The project would help develop land and water management strategies and tools to help guide policymakers as they grappled with the tension between the region’s rapid development and its impact on lakes and their catchments.

"These lakes are early warning indicators — sentinels of change — of the health of the environment."