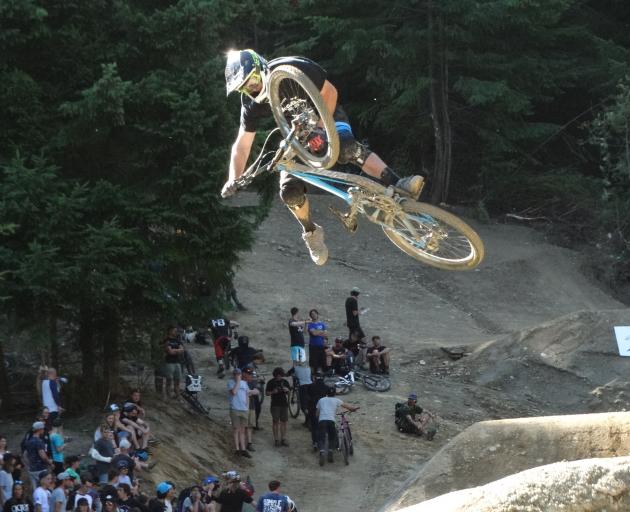 Queenstown mountain biker Reon Boe gets some air on new jumps unveiled at Saturday’s Wynyard/Dream track jam, part of McGazzaFest 2017. Photos: David Williams.
The spirit of mountain biker Kelly McGarry is very much alive on the tracks around Queenstown.

Hundreds of mountain bikers rode, jumped and partied in Queenstown at the weekend to remember the former professional mountain biker, who died riding a Fernhill trail on February 1 last year.

Organisers of Queenstown’s McGazzaFest were amazed.

Kelly McGarry Foundation chairman Fraser Gordon said riders came from all over New Zealand and some had taken holidays to coincide with the festival.

Crowds of several hundred people were common at the five events, starting with Friday’s McGazza memorial "megatrain", a ride into town from the top of Skyline’s gondola, and finishing with yesterday’s Gorge Rd jam.

"We had an idea it was going to be a pretty big event, but didn’t really know exactly, numbers-wise," Mr Gordon told the Otago Daily Times.

"But seeing that queue of people on Friday night for the megatrain stretching all the way down the car park of Skyline, we realised just how big it was going to be."

McGarry’s former neighbour, Matt Goodall, who lives in the pro rider’s home town of Wakefield, near Nelson, rode one of McGarry’s old pro bikes down Skyline.

"It’s good to be here and enjoy the atmosphere and remember good times," he said.

McGarry’s eponymous foundation, which will donate money to mountain bike clubs and community groups, was officially launched on Saturday night.