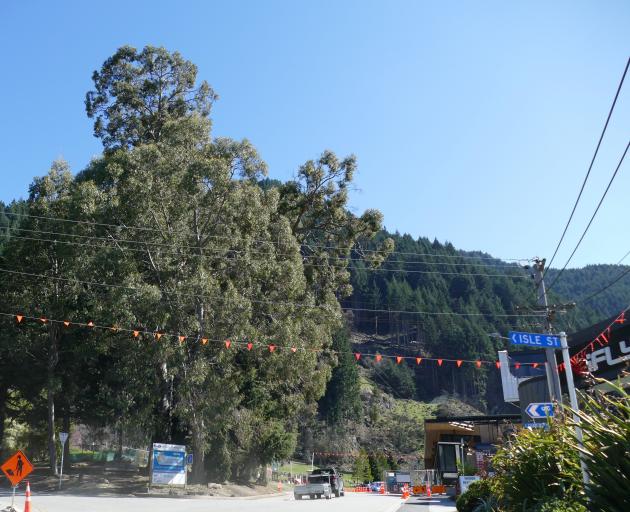 They were due to be felled on Monday to make way for a 4-metre cycle path, part of an upgrade of Brecon St, but in a statement yesterday afternoon, the Queenstown Lakes District Council said their removal had been ‘‘temporarily put on hold’’.

That is because the trees are home to tui, kereru and fantail, and it is believed the latter two are building their nests in the trees at present.

Under the Wildlife Act 1953, it is against the law to ‘‘rob, disturb or destroy’’ the nest of any protected wildlife or game — kereru, tui and fantail are all protected under the Act.

Penalties include fines up to $10,000 for individuals, plus at least $500 for each head of wildlife and egg, or, for body corporates, fines up to $200,000 for partially protected wildlife or game.

For absolutely protected species, the maximum penalty for individuals was up to two years’ imprisonment, or a fine of up to $100,000.

‘‘The Wildlife Act provides general protections for native birds, and I’m unaware if the council has sought a permit from Doc [Department of Conservation] to disturb their nests.’’

Doc Whakatipu operations manager David Butt yesterday confirmed to the Otago Daily Times the department did not receive an application for a wildlife permit in respect of the trees’ removal.

Mr Zwaan said Queenstown had a ‘‘significant number of special trees’’ and was recognised as a Tree City of the World.

‘‘It should be doing what it can to ensure they’re looked after, rather than cutting them down and removing nesting sites for native birds,’’ Mr Zwaan said.

In its statement, the council said the project’s postponement was to allow for an ecological report on the trees to be prepared and ‘‘the possibility of nesting native birds to be investigated’’.

‘‘A further councillor briefing will be held early next week and an update on next steps will follow soon after.’’