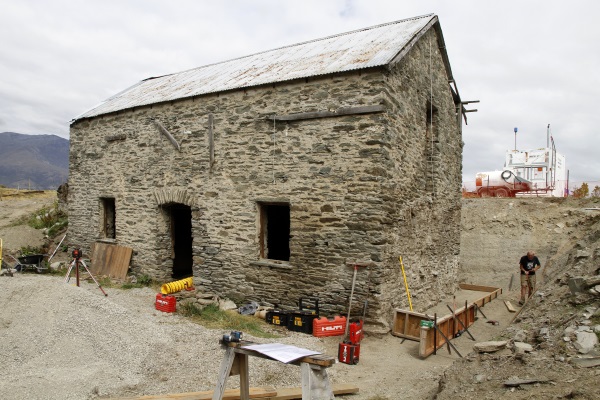 Property owner Roger Monk is restoring this 1870s barn. Photo: Susan Cleaver
Work is under way to convert a derelict 1870s farm building near Arrowtown into a function and wedding venue.

‘‘I’ve always wanted to do it up because it’s had a bit of a hiding over the years,’’ says Roger Monk, whose family has farmed the area since 1964.

Southwest of Arrowtown, the two-level stone building was built by an early farming family, the McDonnells — McDonnell Rd, which the barn’s on, remembers their contribution.

That floor was formerly divided into horse stables and a tack room.

Monk says he’s repairing some of the ‘‘half-stuffed’’ original fixtures and putting them back.

He thinks the upper floor originally stored horse feed, though he and his predecessor used it as a wool shed.

Following a resource consent issued last year, an over-roof’s being constructed over the existing roof, a new floor’s being built over the original timber first floor and a staircase will connect the two floors.

A lean-to structure will replace a 1950s corrugated iron lean-to, and a pergola for wedding ceremonies and toilet block will be built nearby, along with a carpark.

Monk says he needed to restore the building to prevent it from falling to bits.

It’s a costly exercise, however, ‘‘so you’ve got to get a return off it somehow’’.

As a function/wedding centre, it’ll have capacity for 150 people.

An acoustic expert suggests the noise from a function-goer slamming their car won’t disturb the sleep of the nearest residents 300 metres away in Arrowtown’s Advance Terrace.

Monk expects the venue to be open towards the end of next year.