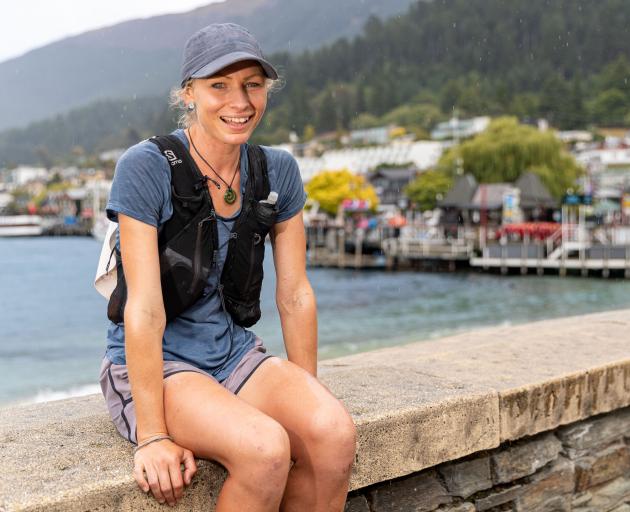 Brooke Thomas, of Queenstown, takes a breather in the resort yesterday morning on her run from Cape Reinga to Bluff. PHOTO: JAMES ALLAN PHOTOGRAPHY
A Queenstown nurse is on track to smash the New Zealand women’s record for running the length of New Zealand.

Brooke Thomas had wanted to run the Te Araroa Trail since getting a pacemaker a decade ago, and set off from Cape Reinga on November 26 last year.

To do so, she has been completing about 60km — the equivalent of one and a-half marathons — each day, running for at least 12 hours almost every day.

In Queenstown yesterday, Ms Thomas (32) said she had been forced to take two full days off after a "wee visit to a hospital" in Te Kuiti, but had been able to "push on through".

From there, she will head down through Mavora, down the Takitimu Mountains, to Invercargill, before the final leg to the finish line in Bluff.

While she initially aimed to finish on January 26, all going to plan — and provided rain did not stop her crossing rivers — she hoped to reach her final destination on Friday, Ms Thomas said.

The experience of running over 53 days had been "awesome".

"Every day, ever since the Timber Trail [in Pureora Forest Park, between Manawatu and Whanganui], every day has just felt like more of an adventure.

"It feels like a privilege to be out there and whenever it gets hard, I just think about people that don’t have the same ability or opportunity and then I just keep going."

Ms Thomas said the hardest part of the run had been through the Richmond Ranges, in Marlborough, while heat in the Central Lakes — up to 34degC in Wanaka — had proved a different type of challenge.

"But I had lots of support, so that’s helped keep me ticking along and it’s a pretty exciting feeling when you’re this close to home."

She had also been raising money for the HeartKids NZ charity, which was her way of giving back for the support and medical expertise she received during her own health journey, and had raised $13,500 of her $20,000 goal.

Ms Thomas’ parents, Robynne and Elwyn Thomas, of Nelson, accompanied her in a campervan until she reached Queenstown and she said there was "no way" she would have been able to do it without them.

Yesterday, her twin sister, Louisa, and her partner, Tim Wu, arrived from Wellington to help her during the final legs.

She was also grateful to her running coach, ultra-runner Adam Keen, of AerobicEdge, who joined her for a tough stretch at the top of the South Island.

When asked what her celebration in Bluff would entail, her response was immediate: "Sitting down".