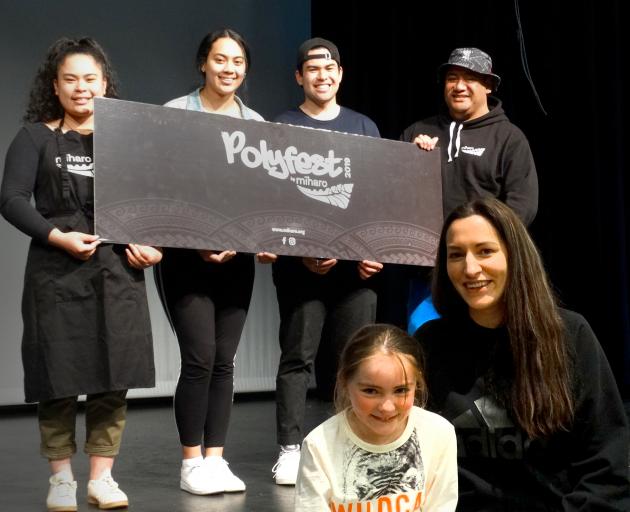 Central Lakes Polyfest co-organiser and Miharo business development manager Mandy Smith, front right, with Indy Taylor (8), of Invercargill, pictured with some of the 28-strong organising crew at the Queenstown Memorial Centre yesterday. Also pictured (back, from left) are Kheelan Thompson-Tonga, Nia Maka, Seiyan Thompson-Tonga and Roy Poulasi, all of Invercargill. PHOTO: TRACEY ROXBURGH
More than 1000 pupils from across the Central Lakes and Southland regions will descend on Queenstown today, performing in the second annual Central Lakes Polyfest.

Mandy Smith of Invercargill, who is business development manager of the event's organiser, cultural trust Miharo, said pupils ranging in age from early childhood to 18 would be taking the stage at the Queenstown Memorial Centre today and tomorrow to participate in the cultural event, which would include kapa haka and Pasifika.

Participants for the 2019 event were up on last year, when about 600 children performed.

The increase in popularity was, largely, due to teachers, Miss Smith said.

"There are a lot of good teachers in schools that are really buying in to Polyfest - the more that things like this happen, the more it becomes normal for the school.''

The event had been running for 10 years in Invercargill and now attracted 10,000 pupils from all over the region, including Stewart Island and the Chatham Islands, she said.

While thrilled with the growth of the Queenstown-based event, the organisers were already wondering if they had outgrown the venue.

The Queenstown Events Centre would be large enough to host it next year; however, there was no guarantee Miharo would be able to hire the courts required and, logistically, it was harder to set up there.

This year performers were having to use space at Queenstown Primary School and the Wakatipu Rugby changing sheds to get ready because the rugby clubrooms had been booked out, and there was not enough space at the memorial centre.

The event begins at 9.30am today with a powhiri and opening ceremony, before performances begin at 10.20am and continue until just after 2pm.

Tomorrow performances run from 10am until about 1.30pm.

Entry to watch is by gold coin donation, and all performances would be filmed live to Miharo's Facebook page,where they would remain.