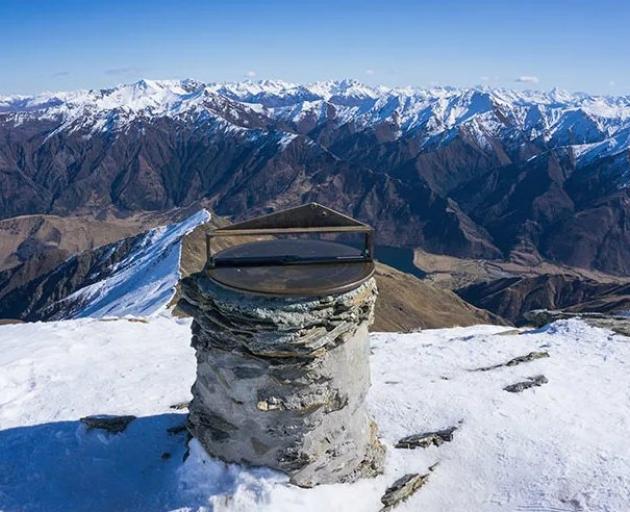 But when when he reached the summit, ‘‘socked in and cloudy’’, he became disoriented because ‘‘there was no plinth’’. 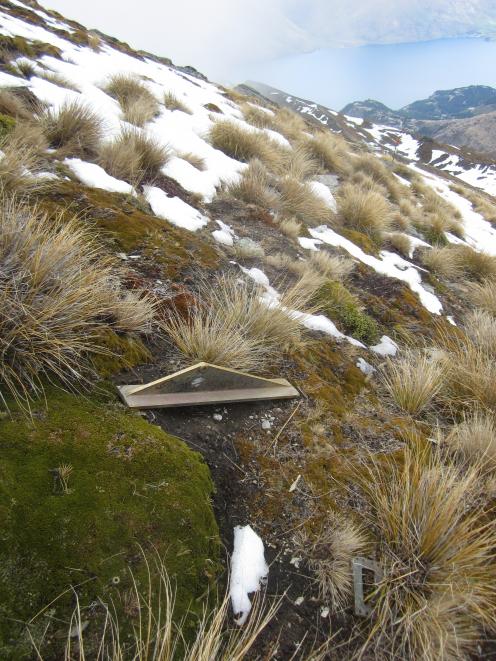 Parts of the plinth strewn across the summit, after an apparent lighting strike last month. Other pieces of the landmark are nowhere to be seen. PHOTO: PHIL PARENT
‘‘There was about 25cm of wind-packed snow at the top and I couldn’t see any traces of concrete, schist or the bronze range finder.

‘‘One small chunk of concrete, about the size of a bowling ball, was exposed in the lee of a wind-drift.’’

It was so smooth his initial thought was Department of Conservation had heli-lifted it off — ‘‘or aliens’’ removed it.

‘‘But both were clearly absurd.’’

Mr Parent contacted Doc, which confirmed there had been no official activity up there.

On Tuesday he went back up to the summit and, in the snow melt, spied a remnant of the viewfinder about 20m from the top.

‘‘Looking up I saw another, larger piece.

‘‘They had been ripped apart and blown away.’’

He could see where the plinth had been at the summit, but there was nothing left.

‘‘In fact, the force of the lightning had shattered the schist ledge, leaving deep horizontal fissures.

‘‘Must have been a massive jolt — kind of like Gandalf at Weathertop.’’

There’s no sign anywhere, though, of the large bronze disc, which was inscribed with the names and elevations of surrounding peaks, and Mr Parent suspects it was ‘‘blown completely off the mountain’’.