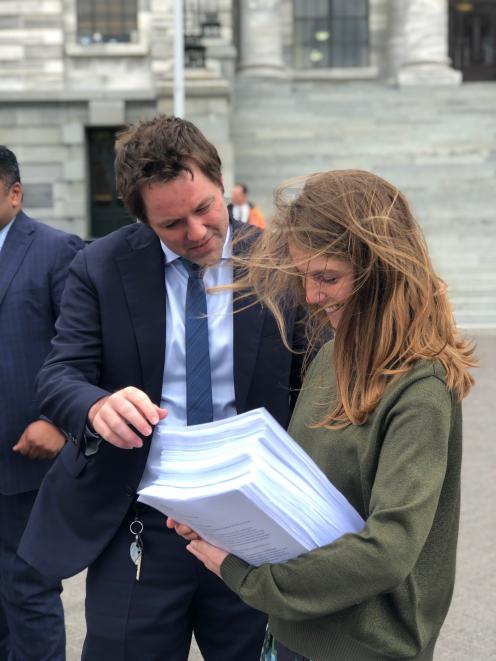 Clutha-Southland MP Hamish Walker with Gibbston film-maker Niamh Peren before she presented her ‘‘Thumbs Up New Zealand’’ petition on the parliamentary steps on Tuesday. Ms Peren collected more than 46,000 signatures pushing for compulsory food and drink labelling systems in New Zealand.PHOTO: SUPPLIED
A petition pushing for a compulsory labelling system for all food and drink packaging in New Zealand has been announced to the House of Representatives.

Niamh Peren, of Gibbston, collected 46,165 signatures for her "Thumbs Up New Zealand" petition over the past year, just shy of her 50,000 goal.

Ms Peren presented the petition on the steps of Parliament on Tuesday afternoon.

She said it was "just a really special moment".

"It's pretty exciting because obviously waste doesn't discriminate, so it's quite a few parties represented on the steps, which can only be a good thing, right?"

The petition was announced by the Speaker on Wednesday and given to the Environment Select Committee to review.

It would then make a recommendation to the Government.

"... also over half of our nation's district mayors signed letters of support, which is pretty huge, because currently they're our biggest stakeholders in the waste industry.

"All Government has to do now is action positive change by creating that legislation, which shouldn't be hard ... I mean, there are harder things to fix out there."