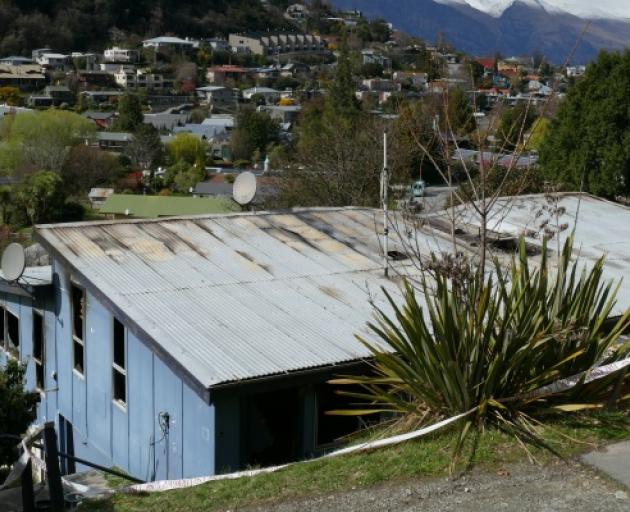 A Ministry of Business, Innovation and Employment team has identified this Huff St property, which had been retrofitted to accommodate up to 28 people before it was destroyed by fire last year, as part of its investigation. Photo: Scene
Queenstown boarding houses are under the spotlight, but the Government agency involved is saying little publicly about what it’s found.

Inspections were carried out in November last year by the Ministry of Business, Innovation and Employment’s tenancy services compliance and investigation team, accompanied by staff from Queenstown’s council and Fire and Emergency NZ (Fenz).

However, when asked for the team’s report and whether or not any action was likely, Watson says the investigation is "currently open" and he can’t provide further information.

The boarding houses involved had both local and overseas occupants with one, a Huff Street property, a "potential cause for concern".

It was involved in a fire just before inspections began.

"This property had been modified to accommodate more occupants than originally intended and on this occasion [Fenz] staff believed that it was very fortunate that this fire hadn’t resulted in a loss of life.

"This case highlights the additional risks tenants can face when living in an overcrowded environment."

Occupants at that address had a narrow escape from an early morning fire last September which left the building badly damaged.

According to an Otago Daily Times report at the time, three people were treated at hospital.

The building was split into four different tenancies with two tenants and two guests in the unit where the fire was, four people in the neighbouring unit, and two in a unit underneath.

A discarded cigarette was believed to have been the cause of the fire.

A Fenz report’s found the property, owned by Conrad Goodger, had been modified to accommodate 28 people.

One unit had no smoke alarm and another had one that didn’t work.

Watson says the team’s found "a number" of properties have been converted to allow more sleeping areas, raising concerns about a lack of facilities for the number of occupants.

"At the properties visited, electrical power points had been modified to support the large numbers of occupants which raises further concerns around safety.

"Concerns about the appropriateness of some sleeping areas were also identified and continue to be assessed.

Watson says the government agencies are "committed to working together" with land lords to address breaches of acts designed to protect tenants.