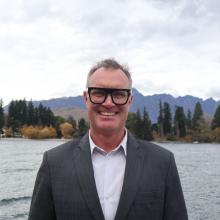 Mat Woods
Former RealNZ Queenstown Experience general manager Mat Woods has been appointed to the role by the Destination Queenstown (DQ) board and will be taking up the reins there on June 20.

Originally from Manawatu, the 50-year-old had been in the Otago region since 1992.

He spent about 20 years with R&R Sport, including almost three as managing director, and was Torpedo7’s retail operations general manager before he joined Cardrona Alpine Resort as its sales and services head in 2016, also taking on that job for Treble Cone in 2020.

He had also been on the Snow Sports NZ board for more than five years, and has been Lake Wanaka Tourism’s chairman for almost three years.

DQ chairman Richard Thomas said he and the board were delighted to welcome Mr Woods to the team.

"Mat has a strong passion for Queenstown and for our reputation as a world-class visitor destination.

"He brings strong leadership and commercial skills, and a deep focus and understanding of revenue generation.

"He is entrepreneurial and has a solid history of building businesses."

Mr Thomas said the board was impressed with Mr Woods’ "energetic approach", understanding of the issues and the sector, and his involvement in developing the region’s destination management plan.

He also had strong stakeholder management skills, and his role with Lake Wanaka Tourism had given him sound understanding of a regional tourism organisation, "which will enable him to hit the ground running", he said.

Mr Woods, who met his wife of 21 years, lawyer Dr Deb Inder, at Otago University 29 years ago, said he could not wait to get started "and really build on that next chapter of the Queenstown story".

He accepted it would also be challenging given the worker shortage crisis and the need to improve air connectivity from international markets.

"There’s still a lot of work ahead of us."

Due to closed borders, his family had to stay in Cairns and while Mr Abbot managed to get to Australia last Christmas, he could not return to New Zealand.

He ultimately decided to put his family first, resigning in February. Less than a month later the Government announced dates to reopen the border.