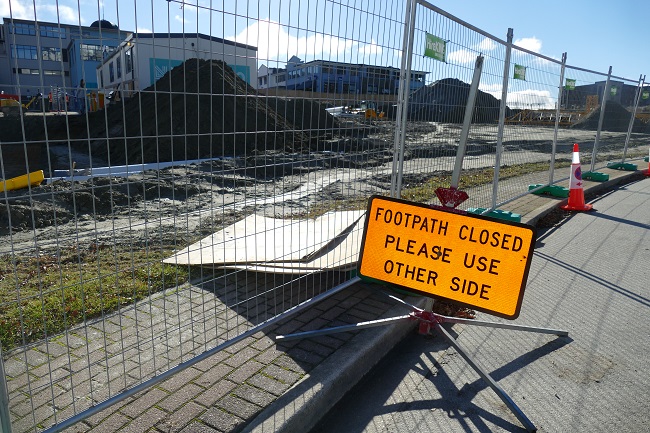 The first building, under way in April with completion date late next year, is Toru East. Photo: Mountain Scene
An apartment block which aims to ease Queenstown’s housing crisis is causing a crisis for nearby householders.

Frankton residents have described the headache of living with constant noise and vibrations due to construction of the new Toru Apartments, and some are thinking about moving out.

And there’s still a long way to go – construction on the 230 units across three high-rises below Remarkables Park Town Centre began less than two months ago.

New Ground Capital (NGC) is building the apartment blocks, Toru East, Toru Central and Toru West, in phases with construction to wrap up at the end of 2021.

The project’s for workforce accommodation and private renting, while the Queenstown Lakes Community Housing Trust has bought 50 for affordable housing.

Copper Beech Avenue resident Michele Fiebig, who has young children and works from home, says it’s been chaos with increased traffic and no parking, as well as constant noise and shaking.

“One day the front of our home flooded due to a burst pipe on the site, which left a couple of residents without water for the good part of the day.”

With a daycare opposite the site, children’s safety is at risk because there are no pedestrian crossings or speed humps to slow down contractors, site visitors and other drivers, Fiebig says. She blames the council for poor planning and not looking after existing residents.

“They’re the ones who approved this and could have implemented safety measures before proceeding.

“It’s not about stopping the development, but it’s about them recognising they’re disrupting people’s lives.”

Fiebig knows of one resident who’s moved out and others thinking about it.

“People who have come here to retire in a beautiful, quiet area are having to relocate.”

Other residents fear traffic woes will worsen when all 230 units are complete because there are only 226 carparks.

Colleen Law, who has lived in her home for more than 20 years, says people are already parking across driveways and sometimes garbage can’t be collected because cars are in the way.

“There’ll be four or five cars [per unit]. Where will they all park?”

NGC boss Roy Thompson believes the parking’s sufficient because there’ll be a big push for people not to use cars.

Thompson points out the site was picked because it’s a minute’s walk to a bus stop at Remarkables Park. Ample bike storage and a shared car scheme will also be available.

“We’ve done surveys and a lot of young people in Queenstown don’t even have cars.

“The cost to us to have carparking is very substantial – many millions of dollars – but we always felt it important to have adequate carparking.”

“We do have traffic management processes in place, like extra safety signs and barriers, and we’ve also got time restrictions to minimise disruption.

“We want to be good community neighbours, so we are encouraging anyone with concerns to get in touch.”