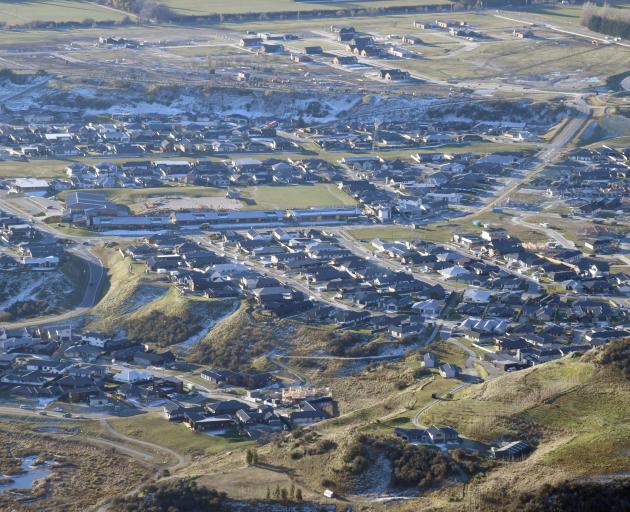 Development of Shotover Country, Queenstown. Photo: Craig Baxter
A large development including 30 homes and a restaurant is planned for a Queenstown suburb struggling with rush-hour traffic.

Shotover Country Ltd has applied for subdivision consent and land use consent for the proposed development, to be built on green space on either side of Stalker Rd, in Lower Shotover.

A two-storey building, just north of Cheltenham Rd, would include a restaurant and another unspecified commercial tenancy on the ground floor, with seven visitor accommodation units above.

Six homes, a large car park and a small children's playground would accompany the commercial building and the remaining homes would be built on Florence Park, on the other side of Stalker Rd.

A planning report prepared by Karen Hanson, of Clark Fortune McDonald and Associates, states the development "will not result in any significant adverse effect on the environment".

Ms Hanson said the proposal would "strengthen the establishing neighbourhood".

Her report compared the proposed restaurant complex to The Hayes in Lake Hayes Estate.

The smaller commercial space, for which a tenancy was yet to be decided, would be 49sqm and the restaurant-cafe premises would measure 280sqm.

Operating hours for the commercial tenancies would be from 7am to 10pm, Monday to Friday, and 8am to 10pm at weekends.

Developers said there would be ample car parking space for residents living in the new builds.

Traffic engineer Jason Bartlett said it would have "minimal transport effects on the local transport network".

"It will provide services in Shotover Country that aren't currently available ... a bit of a local hub."

Mr Stalker would not say what the homes were likely to be worth if the project was approved.

The Shotover Country special zone, which was approved in 2011, identified potential activity areas for the future, including low and medium-density housing, community areas and shared open spaces.

Any development in relation to the special zone would be subject to an outline development plan being approved.

The Lake Hayes Estate and Shotover Country Community Association did not provide a comment on the plans before deadline.