Retiring lawyer looking forward to slowing down a little 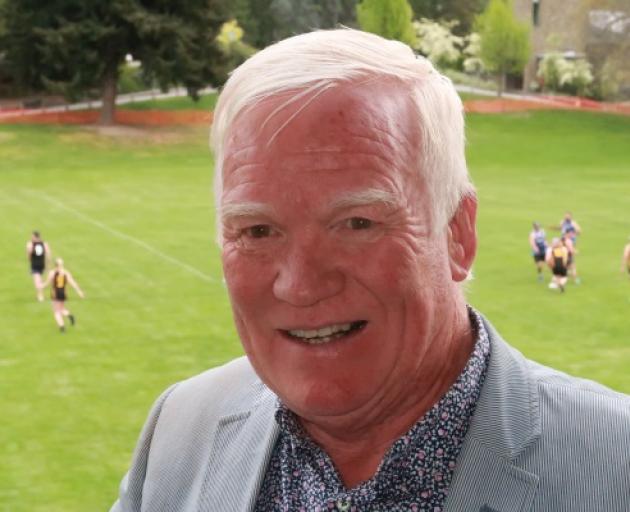 Phil Wilson at his retirement party. Photo: Supplied
From once selling fridges and washing machines to, more latterly, selling legal services, Phil Wilson’s had a very varied business life. On the eve of his retirement, the keen horse racing man discusses his various track gallops, including his huge service to the community, with Philip Chandler.

They say life begins at 40.

Well, for well-liked Queenstown lawyer Phil Wilson, who retired from AWS Legal on Friday, that’s when he started his second life.

In his first, he was a successful retailer.

Raised in Mosgiel, he’d been studying law for two years at Otago University when he was invited by the Jac’s Hardware store owner to open an outlet in Mosgiel.

Wilson, who then had a house and a mortgage, said ‘yes’ so long as he could fit his law studies around that.

‘‘That arrangement lasted for about 11 years.’’

He finally got his degree in ‘83, two years after he’d shifted to Queenstown to open a Jac’s Mitre 10 hardware store in Athol Street.

In that job, he also ran a timber yard in Industrial Place.

By ‘86, wanting to run his own business, he joined partners to open Video Electrics, which morphed into Appliance Court, selling household appliances, in Camp St.

He and this then-wife Bernadette also opened the adjacent Wilson’s Homeware.

However, by the early ‘90s he says the big chains were ‘‘discounting the hell out of TVs and video recorders and all those sorts of things’’.

He wanted to get out, so did a three-month deal to open an H&J Smith store in Frankton, then planned to start selling mobile phones, which he thought would catch on.

Instead, during a closing-down sale in Camp St, he was waiting for a burger at McDonald’s, across the road, when he was tapped on the shoulder by Anderson Lloyd partner Walter Rutherford.

Rutherford asked him, ‘‘have you ever thought about coming to practise law?’’

Wilson says, ‘‘you could have knocked me over with a feather’’.

After checking the following day that Rutherford was serious, the firm sent him back to Otago Uni for three months to get his professional papers, before he donned a suit and joined them in The Mall.

‘‘Walter told me later, ‘we need lawyers who are also salesmen’, so instead of selling fridges and washing machines, you’re selling legal services.’’

After nine happy years, he was then asked to open a local office for Invercargill-based AWS Legal and become a partner.

Having opened hardware stores, he jumped at the chance.

Ironically, AWS opened in Athol St beside where Jac’s Hardware had been, before later shifting to offices in a new building in the same small street.

Wilson, who’s specialised in business, property and personal client relationships, says he’s had a wonderful law career, enjoying a mix of both Kiwi and overseas clientele.

Now 67, he had to vacate his partnership at 65, and has been a consultant since.

‘‘The firm doesn’t encourage you to hang around, they want the young people coming through.

‘‘I’ve been working 50-odd years, so I just look forward to perhaps slowing down a little.

‘‘There’s lots of jobs in Queenstown for retired people.’’

Frankly, his community contribution’s been so extensive, he could be excused a complete rest.

He’s been president of the Lions Club, the bridge club and Wakatipu Rugby Club, chaired St Joseph’s School’s board of trustees, been a district councillor and board member of Destination Queenstown and the Chamber of Commerce, been on the $10 Challenge trust and been a fire brigade volunteer.

Asked why he’s been so involved, he says it comes down to his love for Queenstown.

‘‘I absolutely love the place, I wanted to come here when I was a teenager.

‘‘It’s a wonderful community here, and a great place for kids to grow up — that’s why I had five of the little buggers.’’

As it happens, his second wife Ella’s also heavily involved in the community.

In 2013, they invited friends to a party for their milestone birthdays, then turned it into a wedding party as well.

Throughout his life, since living in Mosgiel near the Wingatui track, he’s also followed horse racing.

‘‘We’re racing two horses at the moment and we’re having a lot of fun, and Ella loves it, too.

‘‘I tell her she’s the love of my life, but thoroughbred racing is my passion.’’