By Tracey Roxburgh
0 Comments
All they wanted was a cheese roll.

A cheese roll was the only thing - other than sleep and, in Mr Angus' case a hug from his daughters - they wanted when they got home.

Mr Bierlin was based in a camp at Glen Innes, New South Wales, with about 120 others, working as a heavy plant supervisor, while Mr Angus was about 350km away, in Port Macquarie, near the Hastings River working in the incident management team (IMT) and also around safety in the field.

They flew out last Wednesday and were officially put to work last Friday.

That day there were two fatalities in Mr Bierlin's area and one where Mr Angus was based.

The bushfires, joining together to create massive fronts, have destroyed more than 1million hectares over the past nine weeks.

Last Tuesday, when the Australians "saw the catastrophic forecast coming and pushed the button", the pair were asked to deploy, Mr Angus said.

Mr Bierlin, working 14 hour days, said it would take some time to process the experience which he described as, at times, "heartbreaking". 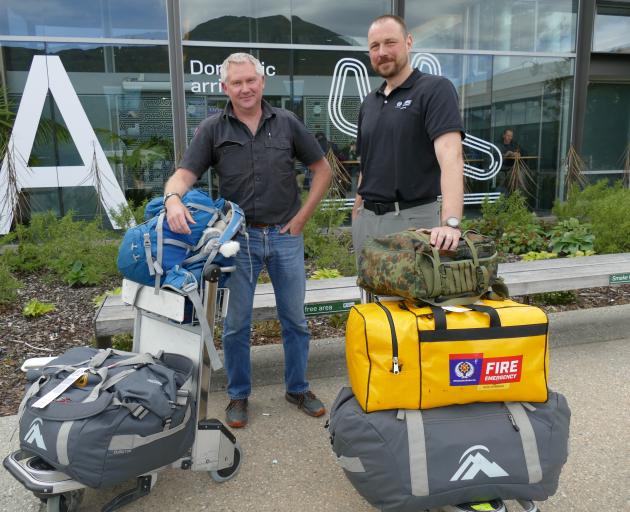 Southern District Deputy Principal Rural Fire Officer Hamish Angus, of Te Anau, left, and Principal Rural Fire Officer Timo Bierlin, of Invercargill, at Queenstown Airport yesterday afternoon. The pair have just returned after eight days of helping to fight the Australian bushfires. PHOTO: TRACEY ROXBURGH
Last Friday he was tasked in a township called Torrington and during the morning was welcomed by residents and had friendly chats with them.

"Just four or five hours later their houses were destroyed and those people were completely devastated ... breaking down in tears.

"That was pretty tough.

"I will have to process that, that was quite intense."

However, there was also a positive in the situation for Mr Bierman, who moved to New Zealand from Germany almost 14 years ago.

"That was the first time I represented New Zealand - that felt really good."

Mr Angus was struck by firefighters in this case working in "pretty much an urban environment".

"There are people around you - it's like street fighting, you're pretty much going from incident to incident."

"Normally, areas are evacuated and then you go in and fight the fire.

"This time we were shoulder-to-shoulder with the community.

"They're a pretty resilient lot, the Aussies ... they're pretty tough and we saw the whole gamut, I guess.

"We saw them at their lowest."

Mr Angus said considering the Australian firefighters had "skin in the game", with their houses under threat - in some cases destroyed - and people in their communities injured and killed, it was the ultimate mark of professionalism they continued to "just stay focused on the bigger picture".

"It's their emergency, but it's our job," Mr Bierlin said.

"We're just happy to help and make a wee bit of a difference."

Another 21 New Zealand firefighters were deployed to Queensland on Tuesday and were to begin operations the next day.