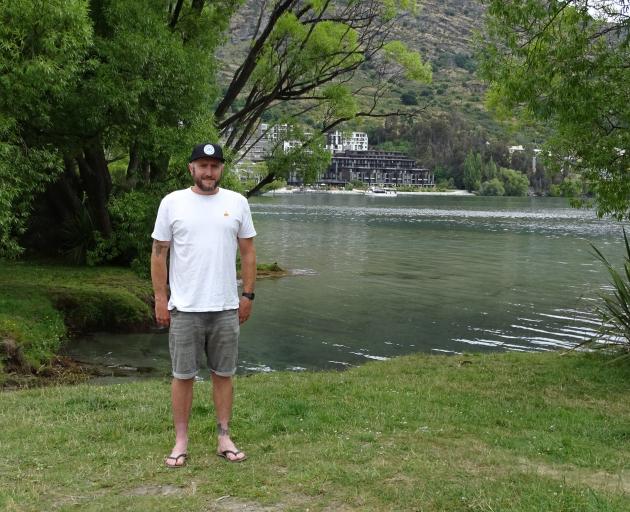 Eli Fynn returns to the spot where he performed CPR on a child who had reportedly almost drowned. PHOTO: CASS MARRETT
A young boy reportedly nearly drowned at Lake Wakatipu in Queenstown on New Year’s Day.

But the CPR skills of a nearby stranger might have saved his life.

Eli Fynn sprang into action when he heard a father calling for help.

The man was carrying a child out of the water and he laid him on the bank.

"He was just fully limp and blue in the lips and I listened and he wasn't breathing," Mr Fynn said.

"Most of my training kind of went out the window.

"I gave him rescue breaths straightaway, hoped it would do something and he came around a little bit.

"I gave him some compressions; he stopped breathing again. [I] gave him some more breaths and he coughed and luckily he just started bawling his eyes out."

He said a child who he believed to be the boy’s brother was "right there watching it, too" and the father was still in the water "exhausted and in shock".

Mr Fynn, the owner of Queenstown Scaffolding Ltd, had undertaken first aid training through work and on a Divemaster course.

"I'm going to book into the refresher course as soon as I get back to work, just to keep it at the top of my head," he said.

"Doing anything is going to be better than nothing."

It was a "huge relief" to see the child breathing again before the ambulance arrived.

"We weren't sure if he had taken on water so we sort of gave him to [St John] to do their job," Mr Fynn said.

A St John spokeswoman confirmed a call was received at 5.53pm to a water incident at Frankton Beach and that St John treated and transported one patient in a serious condition to Lakes District Hospital.

Mr Fynn said he had tried to contact the hospital about the boy’s condition but it could not give out any information.

He also said the father looked familiar, and he hoped to "run into" him in town.

The St John spokeswoman said it could not confirm whether bystander CPR had been performed but was able provide some general advice regarding calling for help and performing CPR.

"We know more lives can be saved if everyone learns the three key steps that can double a person’s chance of survival in a cardiac arrest ... call 111 for an ambulance, start CPR and use an AED (automated external defibrillator).

"We encourage everyone to do a St John first aid course so they can be better prepared to respond in an emergency," he said.

As of yesterday, the total number of drownings this summer was at 25, with another two months to go before the end of the summer reporting period.

Water Safety New Zealand said it has been the worst summer since 2015.

Mr Milne confirmed St John had responded to several water-related incidents this holiday period including another incident in Queenstown on Monday night.

He confirmed two patients were treated and taken to Lakes District Hospital, one in serious condition and one in moderate condition.

Police, St John and Southern DHB were unable to release any further details about Monday’s incident.