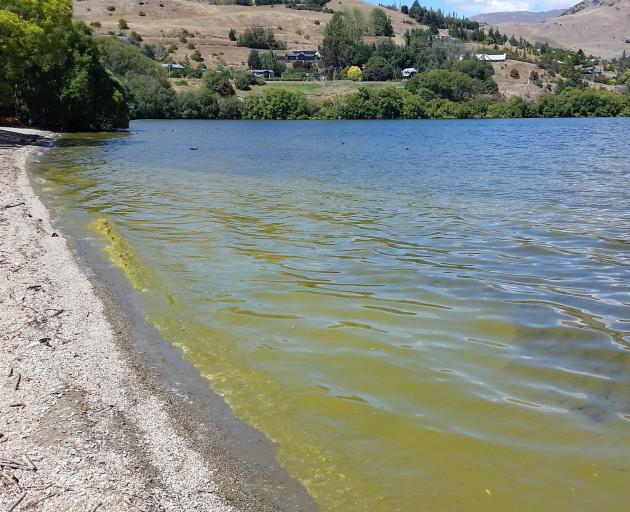 Cyanobacteria, or blue-green algae, photographed in Lake Hayes. Photo: ODT files
Seven days after signs advising against recreational swimming were taken down from Lake Hayes and an area of Lake Wakatipu, they have been put back.

Levels of cyanobacteria, or blue-green algae, had increased to 11.04cumm per litre in Lake Hayes on Monday, particularly around Mill Creek, which is over the level at which it could pose a health risk.

Meanwhile, E. coli levels have skyrocketed again in Lake Wakatipu at Frankton Bay - testing on Monday showed the water had increased to 1414 E. coli per 100ml.

The cause of the high reading is being investigated.

The Otago Regional Council removed signs from both areas last Thursday and reinstalled them on Wednesday. Additional signs were put up yesterday, advising people to avoid recreational contact with the water.

ORC environmental scientist Rachel Ozanne said if dog owners had their pets at Lake Hayes, it was important they were kept on a lead, out of the water and "do not consume vegetation from the water's edge".

"Signs that a dog has been poisoned by toxic algae can include lethargy, muscle tremors, fast breathing, twitching, paralysis and convulsions.

"It is important to treat the first signs of illness as an emergency and contact your vet immediately."

Ms Ozanne said there were other rivers and estuaries in the Otago region showing elevated levels of bacteria due to heavy rainfall last week.

"ORC would like to remind people to be careful of recreating in or around waterways for 48 hours following rainfall, as it is common for bacteria levels to be increased," Ms Ozanne said.