By Tracey Roxburgh
0 Comments
Queenstown Airport may have been one of the happiest places on Earth yesterday.

At 2.31pm Qantas flight QF121, from Sydney, touched down in the resort, with about 100 passengers on board — the first overseas tourists the Wakatipu has seen in 387 days — initially welcomed to the airport with a water arch, provided by the airport’s fire rescue team.

Inside the terminal, hundreds had turned up to welcome the first passengers.

First off the plane were Sydneysiders Rob Miller and his son Stuart, both dressed in dinner suits with bow ties.

Mr Miller said their attire was in recognition of the importance of the occasion.

"It’s such an important [milestone] and a lot of people here in New Zealand and in Australia have done such a lot of work to make it happen, the least we could do was put a bit of effort in to the way we look.

Some in Sydney wanted to see if the bubble was "self-sustaining" and there was an element of caution there, too, about international travel, he said. 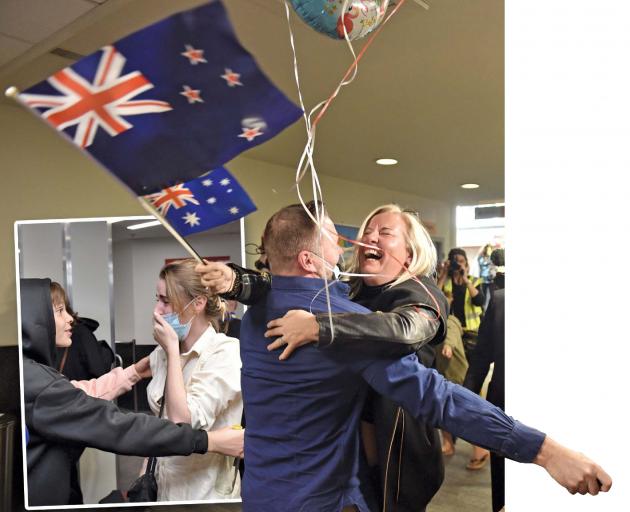 There were tears, cheers, hugs and screams as loved ones were reunited after more than a year, every passenger greeted by Queenstown Lakes Mayor Jim Boult, mayoress Karen Boult and Queenstown Airport Corporation chairwoman Adrienne Young-Cooper, before being offered a choice of kiwiana — pineapple lumps, L&P chocolate and jet planes.

Ms Young-Cooper said the flight signalled the beginning of "a really important recovery from an international perspective".

"It’s really important for the Southern Lakes community ... Although it’s been wonderful having so many Kiwis come and visit this part of New Zealand , really, at the end of the day, we need more."

Included on the passenger list yesterday were Chloe and Claudia de Torres who flew in to surprise their father, Matt, and step-brothers, Rafael (5) and Orlando (12), with help from their step-mother Sara Irvine.

The girls said it had been about 18 months since the family had been together.

"I broke down a lot more than I thought I was going to," Chloe said.

Mr de Torres had no idea what his wife had been quietly hatching, believing he was just at the airport with the couple’s sons to witness a bit of history.

On board was Tim Francis, who came to Queenstown "for 10 days’ holiday" in February 2020.

He owned a home in Queenstown and had been able to work remotely for his employer, the Western Australia state government, he said.

Air New Zealand’s first post-lockdown transtasman flight to Queenstown, NZ232, from Sydney, is due to land at 1.55pm today.