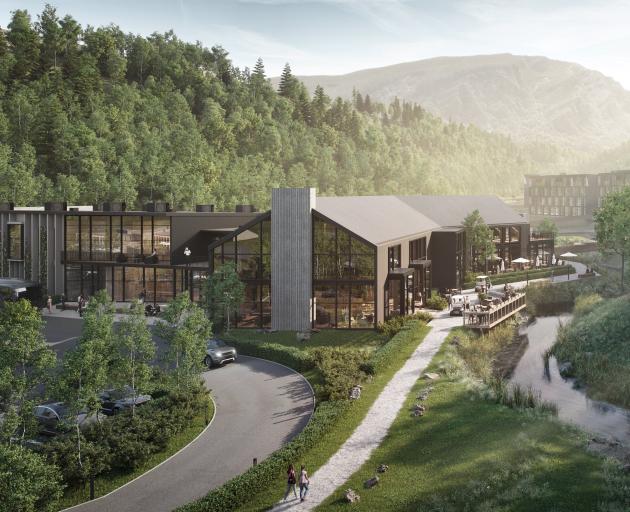 An artist's impression, looking to the north, of the proposed Waterfall Park development's hotel reception and restaurant building.
Environmental campaigners have poured cold water on claims by developers planning a 380-room hotel that the project would not further degrade nearby Mill Creek and Lake Hayes.

Commissioners have spent the last two days putting Waterfall Park Developments Ltd's plans for the Waterfall Park complex, near Arrowtown, under the microscope at a resource consent hearing in Queenstown.

Twelve submissions were made opposing the plans, highlighting concerns of residents and the Friends of Lake Hayes Society (FOLH) over increased traffic, a loss of visual amenity and adverse effects on water quality in the nearby bodies of water.

The society argued heavy rain events could also cause a huge rise in contaminants entering the water.

Although the society is not anti-development, Mr Bowman said ''construction creates disturbance''.

Freshwater scientist Dr Marc Schallenberg was not able to appear in front of the panel on behalf of the society to comment on his scientific evidence due to him being in the Antarctic.

Mr Bowman requested an opportunity for Dr Schallenberg to appear at a later date, but said he was ''disappointed'' commissioners had no further questions for him.

Architect John Blair, who lives near the planned hotel site, said it was a ''disruptive and inappropriate proposal''.

''I have a knowledge and passion for retaining what cannot be recovered once it has been exploited.

''Things should be changed for the better, not the worse.''

The developer was also going through other planning processes related to the proposed hotel.

It received approval from the Otago Regional Council for planned work on Mill Creek tributary last September, which would involve building bridges, weirs and culverts in and over the creek.

The work would only go ahead if the hotel plans were approved by the Queenstown Lakes District Council.

The developer also sought to rezone Ayrburn Farm land as part of the QLDC's proposed district plan, to make way for 200 residential units.

Its representatives said the rewards of the hotel project far outweighed the short-term risks the development could pose to the water bodies and would ultimately contribute to a reduction of contaminants entering the creek.

The company has already cleared a large area of wilding pines and planted about 17,000 trees and shrubs on the land.

QLDC planners have recommended the hotel plans be approved, subject to conditions.

The consent hearing was adjourned to give the developer a chance to review consent conditions proposed by the QLDC yesterday.

Waterfall Park would then consider redrafting its plans and consult with the council and FOLH before a decision was made.