By David Williams
0 Comments
They could not have picked more challenging conditions.

In a spring storm, amid gusty winds and driving snow, the 80-tonne steel roof of a Queenstown commercial building was craned into place on Saturday.

It was a long day — the crane drivers’ toolbox meeting was at 5.30am and the finishing touches were done, under lights, at 7.30pm.

Building owner Julian Snelder said: "After a week of calm, spring weather it was quite ironic that we chose the very day that it decided to snow and blow.

"It was quite windy, gusty, there was a blizzard.

"We actually got a snow load on the roof, mid-lift."

The 1680sqm building is the third in an entertainment precinct at Remarkables Park, near Queenstown Airport. 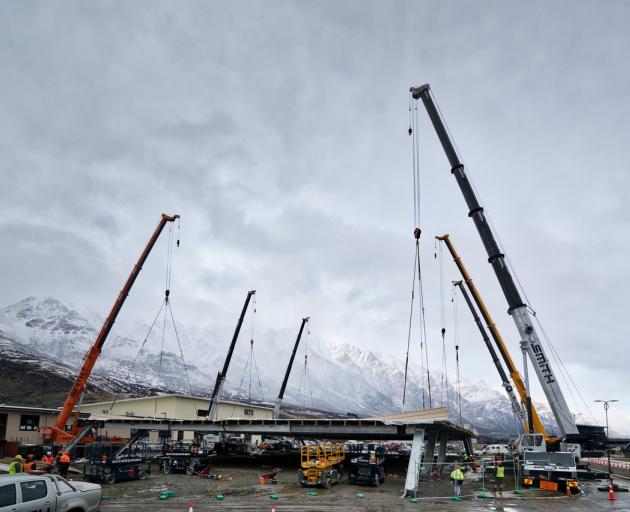 It is Mr Snelder’s first investment in Queenstown.

He grew up in the resort and attended what was then called Queenstown District High School, in Stanley St.

He left New Zealand about 30 years ago and has had a varied career, including engineering, banking and being a fund manager.

Now  in his late 40s, he took advice for his Queenstown investment from his wife Natalie Chan.

"My wife, who’s from Hong Kong, really convinced me of the distinctive value of Queenstown and the fact that I should be doing something there," Mr Snelder said.

"Would I do more business there? I’m certainly looking," he added.

The Remarkables Park building fit-out is expected to start in October, and some businesses to be operating from December.