By Daisy Hudson
0 Comments
Ohau residents are considering taking legal action against a lines company implicated in a report into one of the biggest fires in New Zealand history.

Fire and Emergency New Zealand (Fenz) found an electrical short circuit on a Network Waitaki power pole was responsible for the 5000ha blaze that destroyed 48 homes.

The lines company, however, strongly disputes that finding.

Fenz yesterday released its investigation report and an operational review of the wildfire that started early on October 4 last year.

Fenz Te Kei region manager Mike Grant said specialist fire investigators determined the fire was accidental and caused by an electrical short circuit on a power pole several kilometres upwind of the village, which ignited dry vegetation below the powerline.

The investigation report noted the weather station at Pukaki Downs recorded a wind gust of 127km at 3.30am, at the time of the fire.

As residents of Lake Ohau Village learnt yesterday morning, the cause of the fire there was soon talk of where to next. 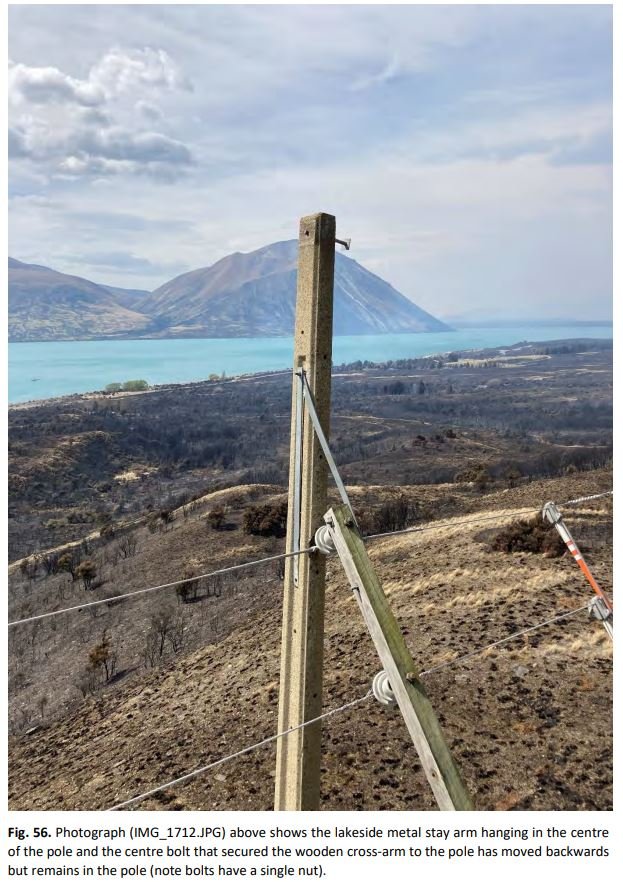 This photograph, taken by Network Waitaki and supplied to Fire and Emergency New Zealand, shows the damaged pole believed to have started the Lake Ohau fire, before it was repaired. PHOTO: SUPPLIED

Hugh Spiers said there had been murmurings in the community about legal action against Network Waitaki now the cause of the fire had been determined by Fenz, but there were no firm plans yet.

"We have a pitchfork but we haven’t quite sharpened it yet."

He and partner Dwayne Rennie owned The Barn at Killin B&B, just outside the village.

The large building, plus outbuildings and several caravans were all destroyed in the fire.

The release of the report brought about some level of closure.

"What’s happened has happened, we can’t go back in time," he said.

At its peak there were 11 helicopters and more than 100 people deployed to fight the fire.

It took firefighters nine days to fully extinguish the fire in an effort expected to have cost $1.35million.

Fenz’s report said investigators believed the failure of a cross arm on power pole 35693 was responsible for sparking the blaze.

Due to bolts with single nuts that had come loose, the cross-arm detached from the pole and flipped, causing one of the power lines on the crossarm to touch a metal stay-arm, resulting in an electrical fault, it said.

The pole was double-nutted only after repairs were carried out.

It became apparent the pole was repaired by the lines company hours after the fire, and later replaced, the report said.

“Looking at the photos of pole 35693 we identified there was more damage than just the arc marks on the metal stay arms.

“At this point we were still unaware of what, if anything, had occurred at pole 35693 except for a repair carried out to the cross-arm. The repair and the fact the pole had been replaced heightened our interest in this pole."

The removed concrete pole was stored at the Network Waitaki yard in Oamaru, where it had been made available for inspection to everyone who had requested it, the report noted.

"The data from our network systems tell the story of what happened that night in the early hours of October 4 and that is what we can rely on. It records down to the millisecond what happens when a power pole or line is affected by an adverse event," he said.

"It is very clear to us that what Fenz is suggesting, could not have been the cause of the fire."

He also had concerns over other aspects of the report and had highlighted inaccuracies to Fenz.
Mr Douch did not want to discuss those in detail, but did say an example was the way the repair and removal of the pole was portrayed.

He said investigators knew on the day of the fire that it had been repaired, and had inspected it while it was still there.

Fenz had expressed no interest in the pole before it was replaced, he said.

It later contacted Network Waitaki about the pole, and was able to inspect it again.

He said Fenz did not seek more feedback and released the report largely unchanged.

"The fire had a devastating effect on the Lake Ohau community and surrounding area. We owe it to this community who lost so much to get this right."

Fenz risk reduction and investigations manager Todd O’Donoghue said Fenz was confident about its conclusion of the ignition source and where it happened. 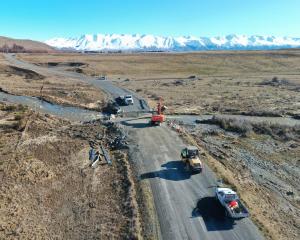