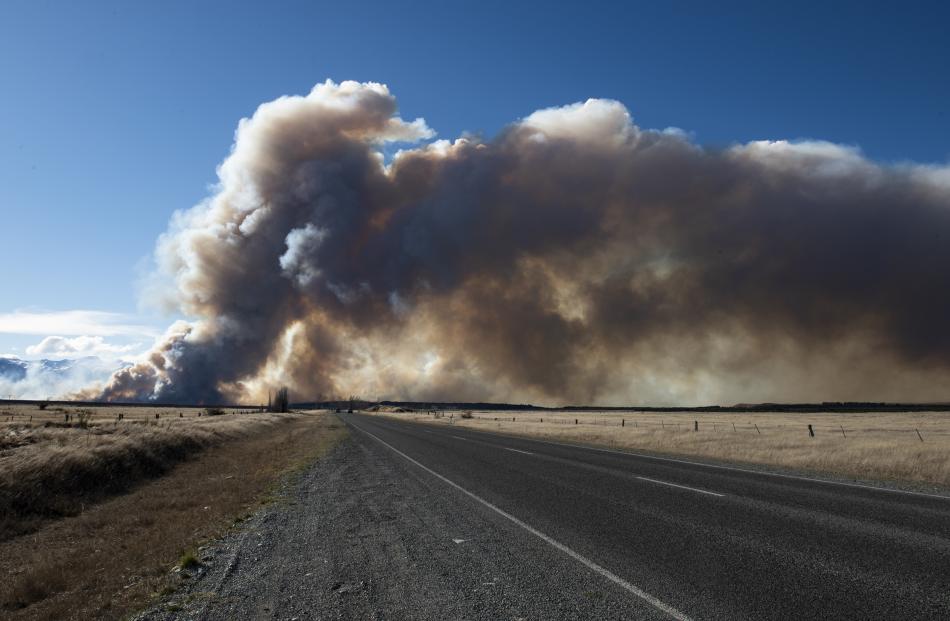 Smoke billows across the highway from the fire near Twizel. Photo: Murray Eskdale 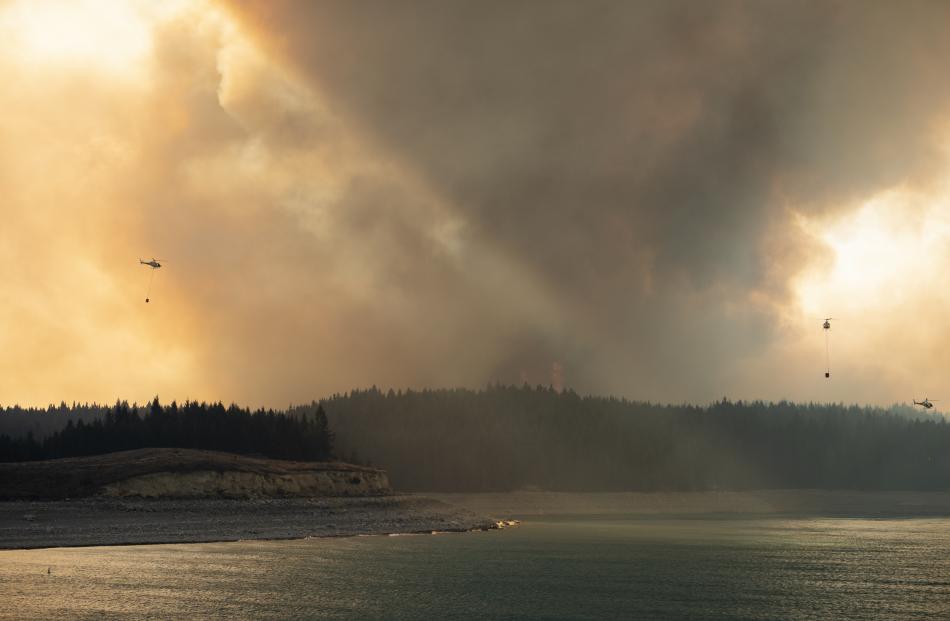 Smoke rises from the blaze as helicopters fight the fire near Twizel. Photo: Murray Eskdale 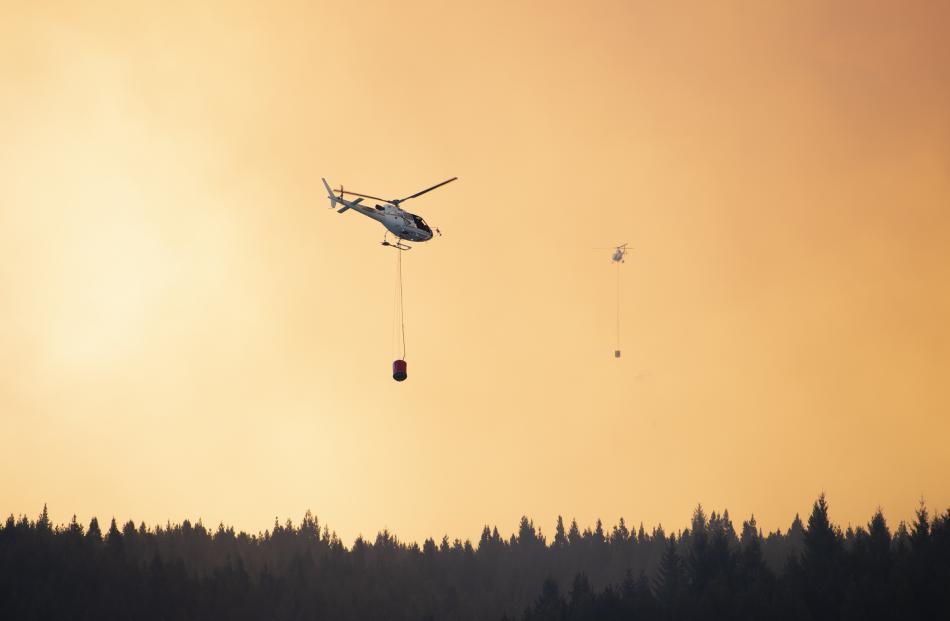 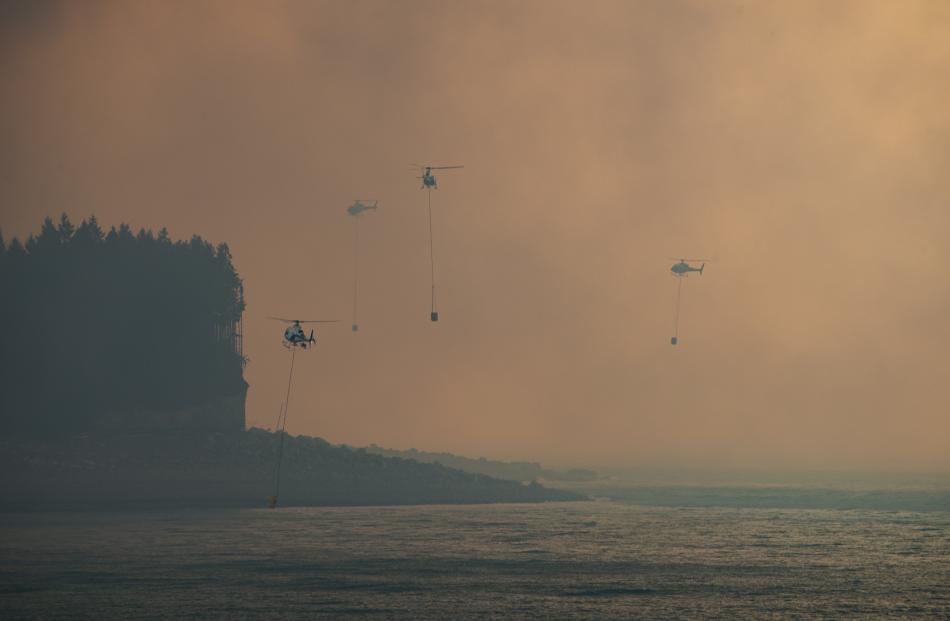 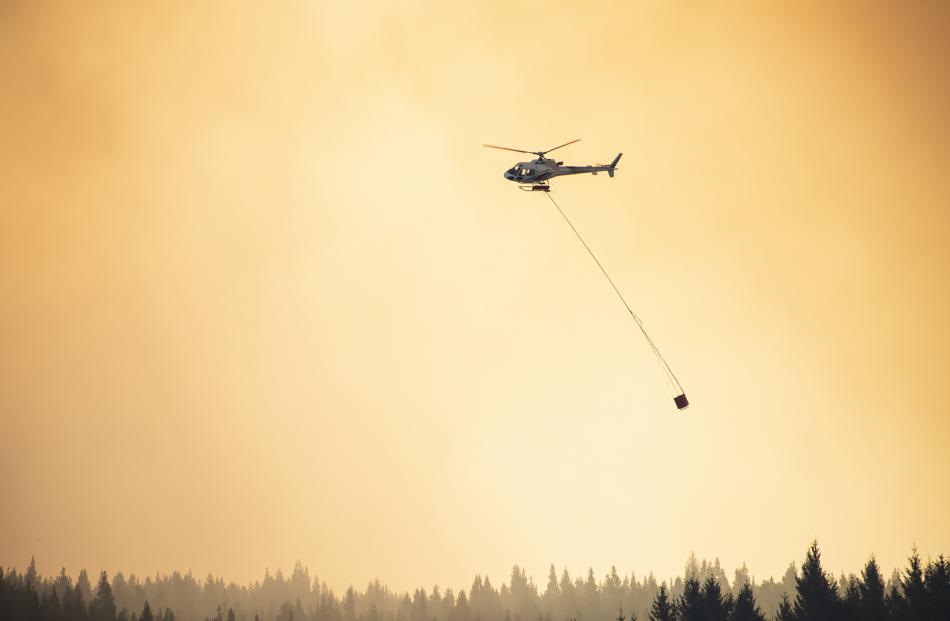 A helicopter fights the fire near Twizel. Photo: Murray Eskdale 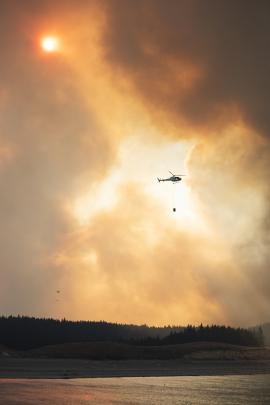 A massive fire raging in the Mackenzie District spread to cover about 3500ha overnight and 17 helicopters and two fixed-wing planes are fighting the blaze today in increasingly windy conditions.

The Mackenzie District Council said in an update this morning assessments had been completed of the fire from the air which has been burning since about  11.25am yesterday.

It is believed to have started when a cooking stove fell over in a grassy area a near Mt Cook Rd (State Highway 80), off Dusky Trail.

"The Northwest wind is a challenge for us in regard to aircraft operating.

"If we're getting 40khm of wind we will be struggling to fly and bucket."

The fire had spread from about 2500ha yesterday to about 3500ha this afternoon and the fire had a  perimeter of approx 25km.

One property was lost to fire last night. Crews had been able to protect a second property and structures and that work continued today.

The helicopters and planes were being assisted by five heavy diggers and two forestry crews.

The wind was forecast to increase to 50-60 kph with gusts of up to 120kph and remained "a significant factor in dealing with this incident". Conditions were forecast to improve overnight.

A Fire and Emergency New Zealand (Fenz) spokesman said the fire had spread to the west overnight.

Minor injuries were sustained by two bystanders during attempts to put out the fire when it first started, but no further injuries have been reported.

State Highway 8 remains closed due to significant amounts of smoke blowing across the highway. The fire was expected to remain on the western side of SH8 and there was no current or expected threat to the Twizel township or Mount Cook Village.

A no flying notice (NOTAM) has been issued to limit activity at Twizel Airport to firefighting operations only.

An incident management team comprising about 25 personnel was established in Twizel yesterday, led by Fenz and supported by personnel from Mackenzie District Council and the Department of Conservation.

About  200 day visitors and campers were escorted out of the area yesterday and further escorted convoys will help people leave the area today.

Police led a convoy of people from  Mt Cook Village to safety along a closed State Highway 80 about 6pm yesterday evening as an out-of-control forest fire raged.

Within minutes, the flames reached a forestry area, producing smoke that blanketed the Ben Ohau Range, near Twizel.

A Fenz spokesman said yesterday Fenz received "multiple calls" to the fire, and 14 helicopters, two fixed-wing aeroplanes and 10 fire appliances were on the ground, trying to get the blaze under control.

Over the course of the day yesterday, the fire jumped from the west side of State Highway 80 to the east side.

State Highway 8 was reopened this morning after being closed yesterday due to smoke blowing across the road.

Police had earlier evacuated properties along the highway.

Two people had been injured in the fire, the spokesman said, but had been treated at the scene by St John.

The fire remained uncontained late last night and was burning over an area of 2000ha of forestry and scrub on both sides of SH80.

Strong northwest winds hampered attempts to control the fire, and at one point, crews had to abandon their fight to save a building as the fire fanned out across the district.

A "number" of buildings were still at risk from the fire, but the Fenz spokesman did not have details on the buildings or their locations.

Holiday-maker Graeme Pennell said he first noticed smoke in the distance when "it looked like a small burn-off" at the base of the Ben Ohau Range.

By 2pm, the fire had created a "huge smoke trail" that covered the entirety of the Southern Alps from his vantage point between Twizel and Lake Ruataniwha.

The fire had grown and appeared to be travelling north.

"We’re probably 5km or 6km away and we could see the flames leaping up into the air from when it hit some of the forest plantation," Mr Pennell said.

"And, of course, the winds are really quite strong here, really blustery."

From his holiday home he said he could see houses not far from the fire.

"But the fire looks like it’s moving away from the houses we can see," he said.

The MetService forecast the strong winds to continue overnight and become severe at times today, with gusts reaching 130kmh.

The Fenz spokesman said the fire was expected to remain on the western side of SH8. 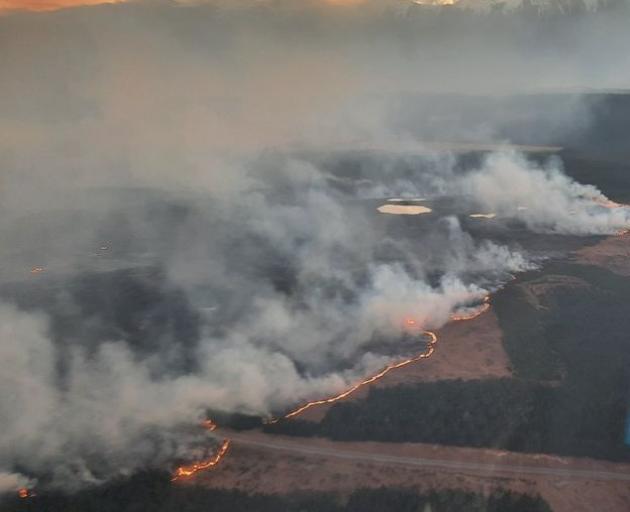 The fire near Twizel burns on both sides of the road yesterday. Photo: Aerial crews via Mackenzie District Council

Helicopter and fixed wing firefighting resources were stood down at dusk and will resume operations at first light today.

Three structural protection teams from Ashburton, Timaru and Temuka remained on scene overnight with a local crew and a command unit, the objective being to preserve property.

He said there was not expected to be any threat to Twizel township (other than possible smoke nuisance) overnight or today. There was also no threat to Mt Cook village.

Smoke from a large fire sweeps across the Ben Ohau range, obscuring the mountains from view. The fire was first reported in a grassy area, but strong winds caused the fire to spread to a forestry plantation. PHOTO: GRAEME PENNELL

"Day visitors and campers have been escorted out."

Fenz personnel would be monitoring the situation continuously overnight, he said.

"We are grateful for the offers of help from the community. 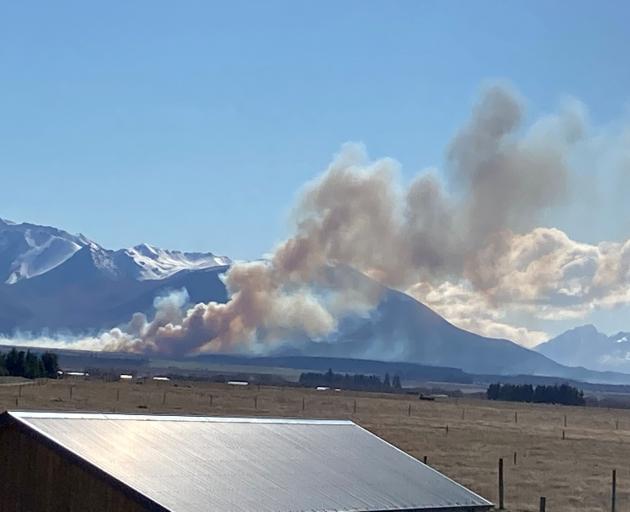 "Currently, we are organising food and accommodation for a number of personnel who we are assisting, and we thank those who have provided resources and support at short notice."

On Friday, Fenz issued a statement noting recent frost curing [drying], coupled with warm weather and high winds, would result in a high fire danger at the weekend for much of the area.

Fires that were normally easy to control would become very difficult during these conditions. 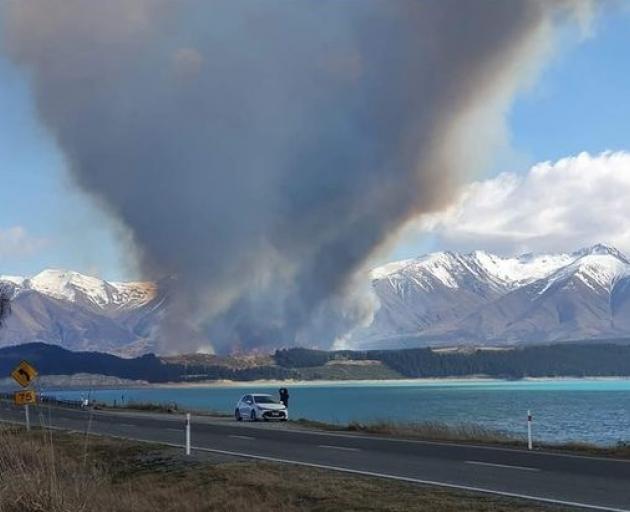 Crews were alerted to the blaze about 11.25am. Photo: Richard Mountain
Comment now