Police are investigating the brutal death of a bobby calf near Waimate at the weekend.

The calf was found at the side of a road on Sunday morning, apparently shot five times and struck by a vehicle.

Dan Studholme, on whose property near Waimate the calf had been grazing, said it was apparent the calf did not die instantly from its wounds.

Mr Studholme was called by a forestry worker who discovered the calf. Then a vet and the police were called.

Rifle round casings were found lying near the dead animal, which had been shot in the leg, stomach and jaw.

A smashed femur indicated it had probably been hit by a vehicle, Mr Studholme, who is also the Southern Canterbury A&P Association president, said.

The animal’s ear tags were removed, though one was found nearby.

He said the circumstances of the calf’s death were odd. It was still not clear whether someone had hit the animal first and then decided to shoot it, or if people were hunting, mistook the calf for a prey animal and then realised what they had done.

‘‘It’s very unusual and cruel for a start. It was a very cruel way for the animal to die. If there was some sort of accident involved they should have notified someone. I suspect it wasn’t an accident.’’

Otago SPCA inspector Sophia Tinirau, of Dunedin, said the SPCA had not been told about the incident yesterday that she was aware of, but joined Sergeant Kevin Reynolds, from Waimate, in urging the public to come forward with any information. She said any act of wilful or reckless ill treatment of an animal is a prosecutable offence of which penalties that could be faced are a fine of up to $100,000, or a prison sentence of up to 5 years or both. 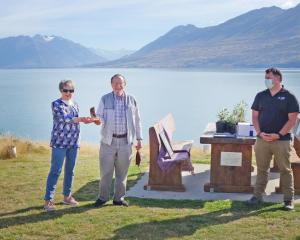