Anger at inaction regarding cenotaph 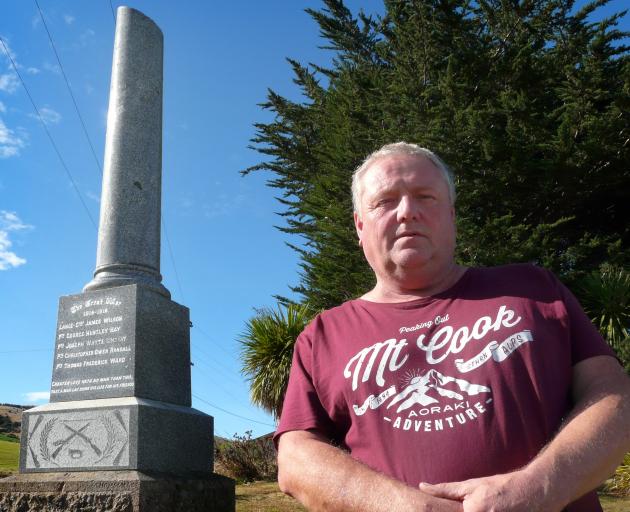 Glenomaru resident Kevin Boam wants the district's cenotaph on the Owaka Highway to be repaired. Photo: Richard Davidson
A rural Catlins cenotaph has found itself at the centre of a heated debate in the run-up to Anzac Day.

Glenomaru resident Kevin Boam contacted the Otago Daily Times this week to register his ''disgust'' at what he believed was long-standing inaction by authorities over the repair of the district's cenotaph.

The Glenomaru Cenotaph, which sits at the intersection of Owaka Highway and Ahuriri Flat Rd, has a damaged column which also appears to have had its top knocked off at an angle.

Mr Boam claims the damaged memorial has been the subject of local ''anger and shame'' for the past 20 years at least.

''Talking to local returned servicemen, the story goes it was moved from across the road when the intersection was upgraded about 20 years ago, and in the process either damaged or replaced with a second-hand monument.

''It's obviously had its top knocked off at some point and the council doesn't seem to be inclined to do anything about it. Frankly it's a disgrace to the district, seen by hundreds of visitors to the Catlins each year.''

Mr Boam said he would be willing to repair the monument at his own cost, if ''red tape'' could be circumvented.

''It just annoys me every time I drive past it. I'm ready to do whatever's necessary to put it right.''

The Clutha District Council said it had no record of complaints regarding the state of the cenotaph, nor of how it came to be in its current state of repair.

Group manager service delivery Jules Witt said it was not even clear whether the monument was in fact broken.

''We don't have any records of when it was moved and if it is broken or intended to be natural granite face at the top.

''It was specifically assessed in 2005 by our monumental mason, and all that was identified at that stage was cleaning and restoration of lettering.''

Mr Witt welcomed any community approach regarding repair and maintenance of the district's monuments.

''Anyone who wants to undertake work on a monument would need to gain permission, and do so in conjunction with a monumental mason and also the RSA as these are war memorials.''

This had occurred during the past decade at Heriot and Waikoikoi in West Otago, where cenotaphs had been refurbished and moved to new locations, he said.

Clutha District RSA spokeswoman Pauline Soper said she could not comment on the state of the Glenomaru Cenotaph as it had not been highlighted as an issue by members.

She said the association would be ''happy'' to talk to concerned parties, although it was unable to provide specific project funding.