Anger in Milton over bank closure 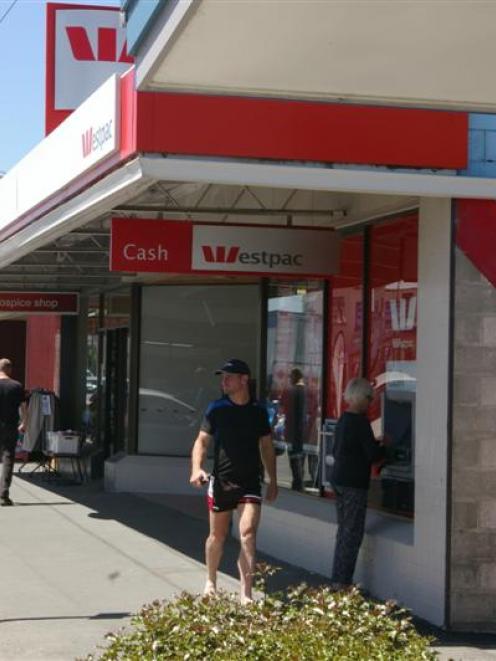 An ATM is all that will remain at the Milton Westpac branch after it closes on Friday. Photo by Hamish MacLean.
Efforts to save Westpac's Milton branch fell on deaf ears, Clutha District councillor Gaynor Finch says.

The bank's Milton branch will serve customers for the last time on Friday.

Cr Finch said the town deserved to be consulted, and for Westpac to say it came to town at the beginning of November with a ''proposal'' to close the branch was disingenuous.

''They came here and their mind was already made up when they met the people,'' she said.

Westpac media adviser Haley Ritchie said the decision to close was not part of a broader strategy to close banks in smaller centres.

But with more customers using online and mobile banking ''there has been a steady decline in the number of customers using the branch and we are concentrating our resources as a result''.

An ATM and deposit facilities will remain in Milton.

Another staff member decided not to take up that option. Businesses in Milton's main street are concerned.

Milton Pharmacy owner Chris London said he was sure the decision was made by executives in a head office ''who haven't got a clue what the geography of New Zealand is like''.

''They looked on a map and said `Milton's not far from Balclutha. That'll do, we'll close one of them','' he said.

''Apart from an inconvenience to us, it's bad for the town.''

A Westpac customer, he was considering switching to Milton's last remaining bank, ANZ.

Stihl Shop owner John Taal said he changed banks as soon as he heard the news, and he encouraged others to do the same.

''It was going to affect us because we need to be able to clear cash and cheques on a daily basis,'' he said''We need a local bank to do that. A drop box won't suffice.''

He said it was important for the town to retain a banking facility.

He made submissions on Westpac's proposal after he met bank managers and the mayor and councillors in Milton last month.

In his submission, he suggested several proposals that would have seen the branch remain open in a limited capacity so a presence of some sort could be retained.

Westpac New Zealand lifted its cash earnings for the year ended September 2014 to $864 million, a 13% increase on the previous corresponding period.