AOS raid on house in Owaka 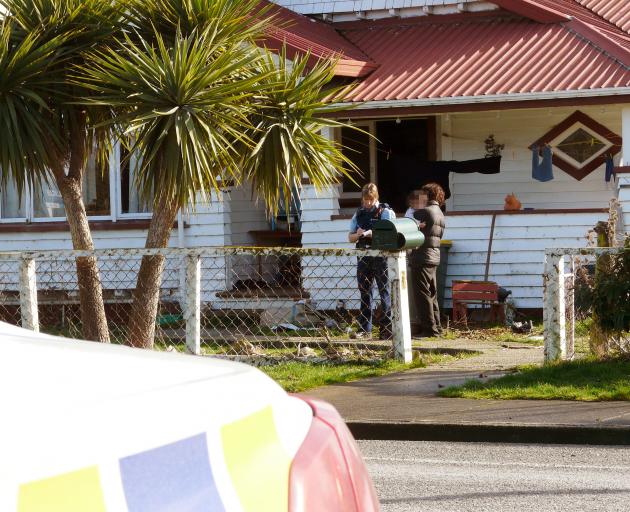 A uniformed police officer questions an Owaka resident at the site of an armed offenders squad callout at lunchtime yesterday. Photo: Richard Davison
A quiet Catlins town went into lockdown yesterday as armed police stormed a house metres from its police station.

The armed offenders squad is believed to have apprehended a person and retrieved a firearm during the callout in Owaka.

Police were called about 11am to an incident at a property on Papatowai Highway, diagonally opposite the Owaka police station.

Road blocks were put in place by armed police to stop traffic using the highway, which runs through the centre of the town, and other streets.

The manager of a nearby shop who saw the incident unfold said she had been called by police before noon, telling her to lock her doors and keep any customers inside.

Armed offenders squad members then approached and entered the nearby house without incident.

Police gave her the all-clear about 12.10pm, saying a person had been apprehended.

Shortly afterwards, a uniformed police officer was seen removing what appeared to be a rifle from the property.

Police could also be seen in the front garden of the property, talking to a woman holding an infant.

A neighbour who saw the incident said it was the second consecutive day police had visited.

''They were down yesterday, searching the place, too.

''I just saw all the cop cars and kept well away.''

During the incident, which lasted about an hour, Catlins Area School, some 300m away, was also sent into emergency lockdown.

Principal Kate Staniford said police called the school just after 11am to inform her of the situation.

''We put our emergency plans into action, including keeping all children and staff inside, as advised by the police.''

Everyone remained calm, and the plan worked well, she said.

After the incident, the school day resumed, and pupils were allowed outside during lunch break ''as normal''.

Police said the armed offenders squad was called out ''relating to an ongoing inquiry'', but were unable to comment further yesterday.