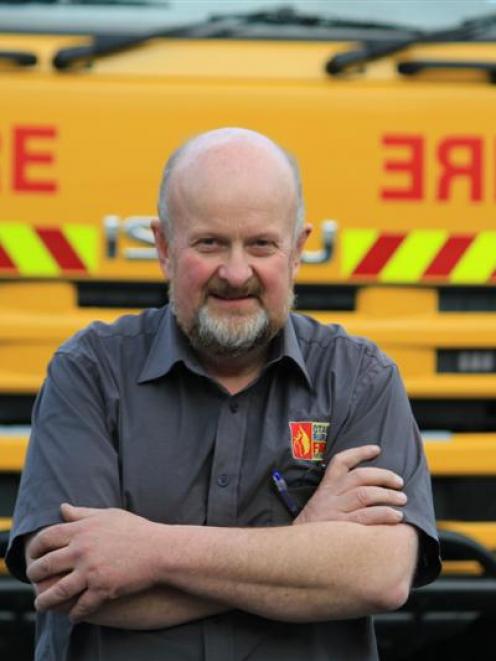 Otago Rural Fire Authority equipment and maintenance officer Ian Rietveld stands in front of a Dunedin-based water tanker at Balclutha yesterday. Photo by Hamish MacLean.
The greatest challenge facing rural firefighters in Clutha is fleet safety as no fully operational water tankers are in service between Dunedin and Clutha Valley.

The council is being asked to consider a one-off grant of $344,250 to help pay for the replacement of four water tankers around the district.

Dr Rotarangi told the council the tankers were not fit for purpose as emergency services vehicles.

Three of the six deaths of rural firefighters in New Zealand since 2008 were in tanker accidents.

The water tankers at Clutha Valley and Lawrence were deemed not fit for purpose and taken off the road, Dr Rotarangi said.

The rural fire authority had replaced the vehicles.

The tankers for the Balclutha Volunteer Fire Brigade and the Waihola Volunteer Rural Fire Force were now operating under major restrictions, she said.

Once those replacements had occurred, the rural fire authority would have enough funding from its operational grants to make further replacements.

The rural fire authority received $226,320 in 2014-15 from the council, one of six founding members that contributes to its annual operating budget.

''In that expenditure we have a depreciation amount for planned replacements from 1st of July going forward. What we haven't had is any of the accumulated depreciation for the fleet.''

The rural fire authority was formed on July 1, 2014, and took over the responsibility of replacing and maintaining the existing fleet.

The rural fire authority is the largest in New Zealand, and Otago is deemed the highest risk region.