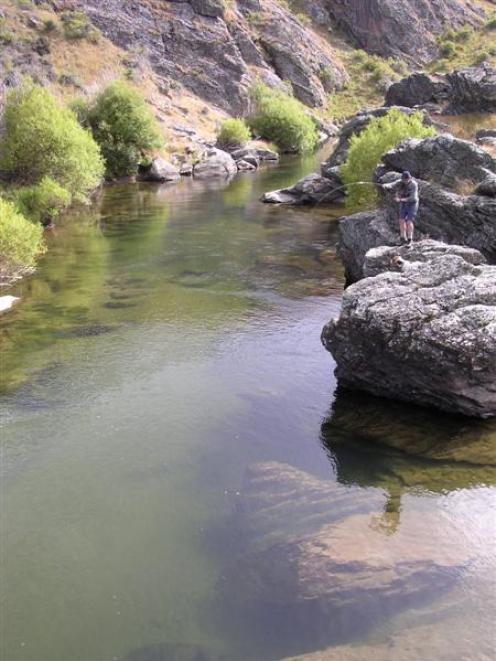 Above and below: According to recent surveys, the Nevis sustains a fishery which features trophy-sized brown trout. Photo by Otago Fish and Game.
Battle lines have been drawn in the Nevis Valley as recreational users of the Nevis River seek to protect the landscape, heritage values and trophy trout fishery from power companies who are eyeing the river for future development of hydro-electricity generation. Alexandra reporter Lynda Van Kempen takes a closer look at the troubled waters.

The spotlight will shift from the Clutha River to the Nevis River for the next month, as the fate of hydro-electric development on the Nevis is decided by a special tribunal.

Just as plans for further hydro dams on the Clutha are taking shape, lobby groups and individuals are moving to block any similar development on the Nevis.

The New Zealand and Otago Fish and Game Councils have sought a change to the existing Water Conservation Order on the Kawarau River, asking for a ban on damming the Nevis River, along with conditions on minimum flows.

A special tribunal has been appointed by the Ministry for the Environment to determine whether hydro development on the Nevis River should be banned, or whether the status quo should remain, which would leave the option open for dams on the river.

The application has attracted 248 submissions, most against dams on the river.

The month-long hearing begins this week in Cromwell.

Otago Fish and Game Council chief executive Niall Watson concedes the move may be seen as a "pre-emptive strike", before any power companies apply for resource consent to dam the river.

Under the terms of the existing water order, dams are not prohibited.

Fish and Game and a wide range of other environmental and recreation groups are pushing for tighter controls on potential development on the river, saying it is one of the few remaining "free-flowing" rivers in Central Otago.

On one side of the argument are the anglers, trampers, four-wheel-drive club members, kayakers and skiers, who maintain the Nevis Valley would be spoilt if a dam was permitted.

New surveys of the river had highlighted its importance as a trout fishery, they said.

"The trout habitat afforded by the Nevis is outstanding in that it sustains a headwater trophy brown-trout fishery based on resident fish that have an average size that is far greater than most brown trout fisheries in Otago," the councils said in their application.

A dam would threaten the many historic goldfields sites, the landscape values and the wilderness characteristics of the area, many submitters said.

On the other side of the argument are local and regional authorities, power companies and a few individuals, all of whom say the existing water order provides adequate protection of the river.

Those processes were an adequate and appropriate way to determine whether any hydro development was successful, submitters in favour of the status quo said.

Given the push towards using renewable sources to generate electricity, it was unwise to rule out hydro development on the Nevis, the power companies said.

The Department of Conservation and Ministry of Economic Development (MED) have also entered the debate but are remaining neutral.

In its submission, approved last year by David Parker as the Minister of Energy, the MED said it was important to preserve opportunities for hydro development.

However, energy developments should not occur at any cost, and consideration had to be given to the adverse environmental effects associated with such ventures, it said.

A hydro scheme on the Nevis would generate up to 45MW, which would "make a modest contribution to the increased generation capacity required to satisfy demand," the MED submission said.

Arguments put forward by those wanting to ban dams on the Nevis include. -

> More research has been done in the past decade on the important conservation and recreation values of the Nevis Valley so extra information is available about its landscapes, heritage values and trophy trout fishery.

> Continuing interest in the Nevis River for hydro-electric power development poses a serious threat to those existing values.

> The diversity of alluvial gold-mining sites in the area, along with the lack of modification and the visibility and accessibility of the area make the Nevis goldfields site nationally significant.

> The Nevis is one of the most challenging kayaking rivers in the country.

Those seeking the status quo say. -

> The matter was addressed at the last hearing and dealt with then.

> The existing Water Conservation Order does protect the river.

> The processes in place through the Otago Regional Council's water plan and Central Otago District Council's district plan are sufficient and appropriate.

> Any application to dam the Nevis would have to go through those processes.

> This amendment to the water order would rule out any hydro development on the river, yet the Government has set a target for 90% of electricity to be generated from renewable sources by 2025.

> Applicants are seeking changes to a Water Conservation Order, to prevent any damming of the Nevis River.

> The special tribunal appointed by the Ministry for the Environment is made up of Richard Fowler, Carolyn Burns and Rauru Kirikiri.

> The hearing is based in Cromwell and is expected to take about four weeks.

> The application attracted 248 submissions, which are online at www.mfe.govt.nz.

> Water Conservation Orders are set up to recognise and sustain waters that are considered to be outstanding as a habitat or fishery, or have scenic, scientific or recreational values.

> The existing order took effect in 1997 and it did not prohibit damming of the river.

> The tribunal will report its findings to the Minister for the Environment.

> Its decision can be appealed to the Environment Court.

Supporting the order - seeking a ban on dams and no diversion of the river flow:

"The lower Nevis flats are essentially an outdoor museum of gold mining from about 1863 to the 1930s, which must not be allowed to be destroyed . . ." - Mike Floate, Otago Goldfields Heritage Trust vice-president

"We must protect such areas and have the wisdom, foresight and prescience to understand that issues of national identity and, or, the wild are only going to become more compelling." - Anton Oliver, Oxford, England

"The Nevis River . . . has one of the steepest gradients of any currently kayaked river in New Zealand, making it irreplaceable." - Central Otago Whitewater

"I have not seen a balance sheet that quantifies the financial value of this fishery. Would this match the value of hydro-electric generation to the community?" - Mark Beaton, Outram

"The opportunity for future generations to apply for consents to build an environmentally friendly hydro power station should be preserved." - Don Clark, Bannockburn

"The original conservation order and this amendment are classic cases of unnecessary negative management in advance." - Don Spary, Queenstown