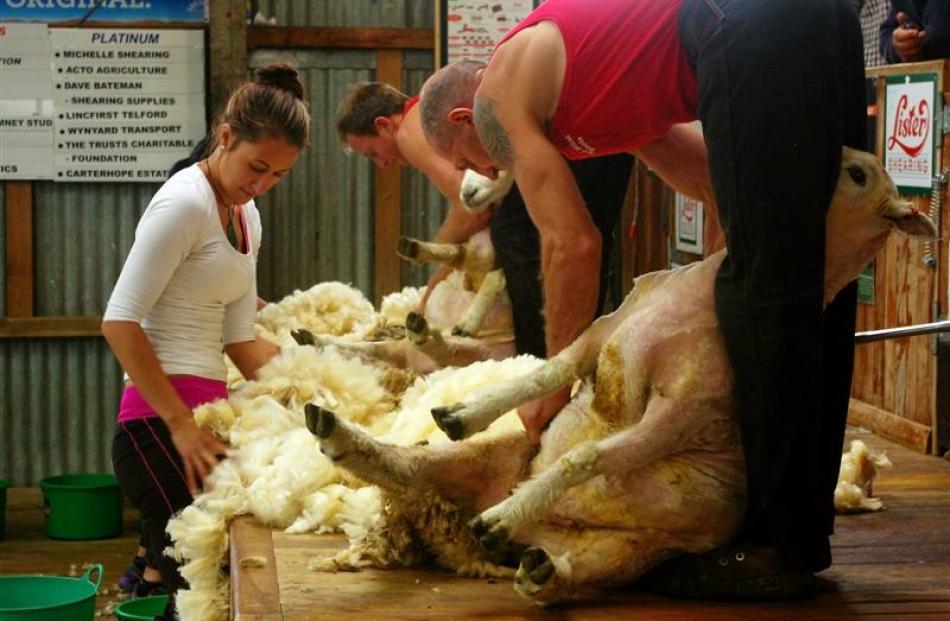 Chiquita Tamepo, of Winton, competes in the Melrose Station Junior Woolhandling competition while Bruce Walker, of Owaka, performs resident shearer duties on the first day of the Otago Shearing and NZ Woolhandling Championships in Balclutha yesterday....

Shearing legend David Fagan is taking one last shot at winning the open final that started it all for him.

Mr Fagan (53) of Te Kuiti won his first open shearing final at Balclutha's Otago Shearing and Woolhandling Championship in 1983 at the age of 21.

He returns to Balclutha today for his last competitive swipe at a southern sheep in the Otago Shears, after announcing this year that he is ending his competition career of 37 years at the New Zealand Championships in Te Kuiti in April.

He said Balclutha had been a ''special place'' for him over the years, but he expected a challenge.

''In the early days, when I was younger, if there were older guys around ... I would have been hoeing into them, just like the younger guys should be hoeing into me,'' he said.

As one of the ''older guys'', he said, he wanted to end his career while he was still winning.

He comes to Otago Shears fresh off a win at Southland Shears in Winton in January.

Shearing Sports New Zealand media officer Doug Laing said this year's open shearing final was wide open, but many would see the man who had won more than 600 titles around the world as the one to beat.

He said while the Golden Shears in Masterton at the beginning of March is known as ''the Wimbledon'' of shearing, with the countdown on, Otago Shears was the event where shearers began to step up their game.

There were a lot of top shearers competing, but Mr Fagan was not simply fast and clean, ''he's just a bit like Phar Lap,'' he said.

''He's got that X-factor and he's got the determination to be the best.''

Mr Fagan was not making predictions about his chances yesterday.

''It's the same as any sport at all, there's incredible talent around, and what makes the difference in the end is your top two inches.

''No matter who you are there's no guarantee that you'll be in the final,'' he said.

Today's main events conclude the day, which begins at 7.30am.