Links with past evident as trail opened 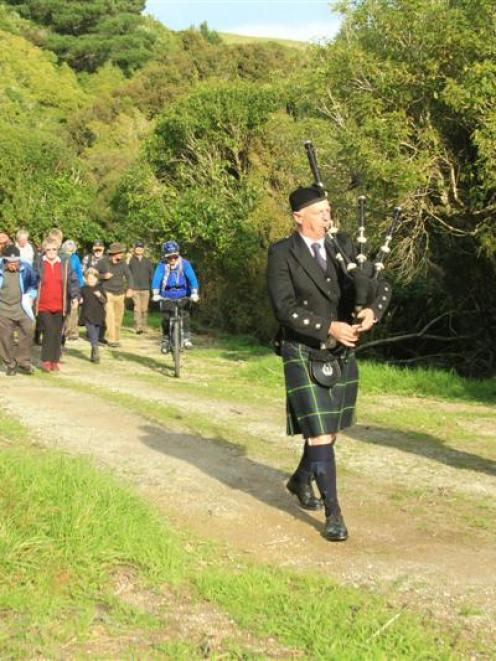 Andrew McColm (left) and Gordon Watson, of the Dunedin City Pipe Band, lead a group of 80 walkers up the 1.5km Matai Rail Trail on Table Hill, south of Owaka, after it was opened on Saturday. Photo by Hamish MacLean.
Mike Vaughan, of Dunedin, packed a picnic lunch with his wife, Nola, and ventured south to Table Hill, in the North Catlins, for the opening of the Matai Rail Trail on Saturday.

When he was younger and still lived in Tahakopa, Mr Vaughan worked as a fireman on the line as it made its once daily round trip from Balclutha to Tahakopa and back again.

At the opening ceremony for the new 1.5km walking track, south of Owaka, that has reclaimed the rail line, an interpretive panel at the start of the trail was unveiled. To his surprise, Mr Vaughan saw a photo of his father among several used to illustrate the walking trail's history as a rail line.

From 1948 to 1957, Mr Vaughan's father, Jim Vaughan, was a driver on the Catlins River branch line. Mr Vaughan had never seen the photograph before.

For many in the crowd of about 90 people, there were family ties to the reclaimed rail trail.

The rail line was completed and officially opened in 1915. It linked the then thriving mill town of Tahakopa to Balclutha and the rest of the world until it closed in 1971.

The walking trail is a joint effort by the Department of Conservation and Catlins Promotions, their second completed trail in the Catlins after completing the two day loop track along the Catlins River two years ago.

Secretary of Catlins Promotions Fergus Sutherland came up with the idea in May 2013, the promotions group raised $20,000 for the trail's construction and volunteers cleared the 80m track that connects it to the Matai Falls walking track.

Mr Sutherland first came to the trail as a geology student at the University of Otago, when he first saw the fossils embedded in the rock that workers had to blast through in the steepest and most winding portion of the trail.

Now, a small interpretive sign notes the fossils along the exposed rock of the cutting at the base of the trail.

After the ceremony on Saturday, Warren Burgess, of Owaka, on horseback, led Dunedin City Pipe Band pipers Andrew McColm and Gordon Watson and a group of 80 walkers of all ages up the gentle grade of the trail to the picnic spot Catlins Promotions has created as an endpoint.

After the hour long group walk, a reception with entertainment, memorabilia and afternoon tea was held at the Tahakopa Memorial Hall.