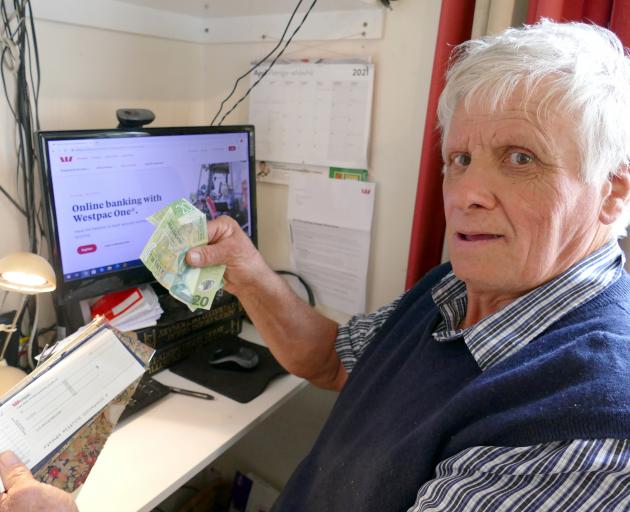 Tahakopa retiree Don Sinclair says many senior citizens still prefer cash or cheques over online banking, despite a continuing push to move customers online. Photo: Richard Davison.
Clutha pensioners say they are being "backed into a corner" regarding a continued push by banks to move services online.

Long-standing Catlins Senior Citizens treasurer Don Sinclair, of Tahakopa, said he and wife Eleanor would be attending the Stepping UP online banking training module on the DORA digital bus which is in the district until next Friday.

However, they said some club members and other older friends would not be taking part, and were likely to face increasing difficulties carrying out basic banking as a result.

Mr Sinclair said banks’ gradual move away from the use of cash and cheques, to card and online transactions, was leaving behind much of the older generation — and many others either unable or unwilling to go online.

"A lot of people I talk to think the problems will go away and banking will return to normal. But that’s just not going to happen if you look anywhere in the world, and pay attention to what the banks have gradually been doing during recent years.

"Both as a club and as individuals, there are many reasons we need to use and deposit cash, and make payments using cheques, but the banks just seem to be ignoring the distress calls that are going up from thousands of their customers."

Rural branch closures were only exacerbating the problem, he said, as many older people living remotely lacked the means to access their bank without long-distance travel.

"We hear they’re trying to make it faceless and cashless. But I just call it useless."

Mr Sinclair said he had heard of some who were getting their accountants to pay all bills for them, and others forced to ask relatives to help with banking.

"On the one hand, we’re told to keep our passwords secure, and on the other we’re being forced to rely on others. It just hasn’t been thought through properly, in a practical sense."

He said he feared many clubs would fold as a result of the enforced banking changes.

"I’ve now, reluctantly, stepped down as treasurer for the Senior Citizens, and I can see others doing the same as it’s just becoming too difficult to do the simple stuff."

DORA (Digital On-Road Access) is a travelling digital classroom, allowing tuition of up to eight adults a session.

The bus begins touring Clutha today, in Tapanui, and is holding sessions in the district’s main towns until May 7.

Sessions are free and open to all, and are supported by Digital Inclusion Alliance Aotearoa (DIAA) and Kiwibank.

"However, with reduced services and bank closures, there is a need to respond and provide an opportunity for everyone to be better informed about online banking, and understand how to detect and avoid scammers.”

"The Covid-19 lockdown created real challenges for people without online access, and that’s why we are so passionate about digital literacy programmes like Stepping UP, which help people build their confidence and skills over time.”

Full programme details can be found at steppingup.nz/dora-clutha.