Point at issue: to seal or not to seal 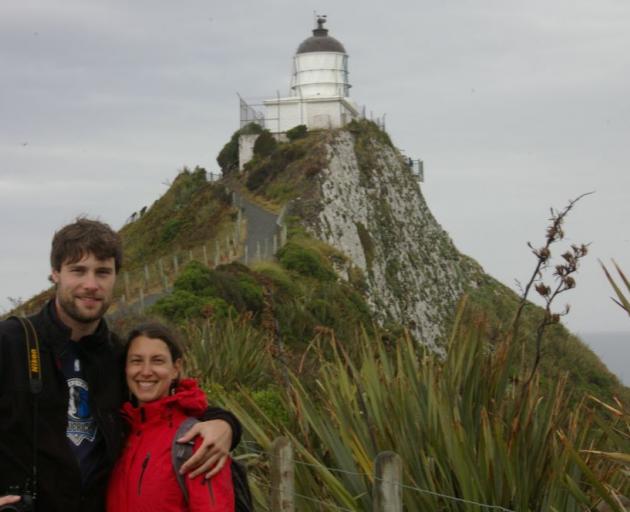 Jens Hoffmann and Carmen Fluhr, from Germany, gave the unsealed road to Nugget Point mixed reviews yesterday. While he liked it, she found it ''scary''. Photo by Hamish MacLean.
Whether the road to Nugget Point should be sealed is being debated by both tourists and the Clutha District Council.

Early next year the road to the popular stop will be a point of discussion for ratepayers and as the public consultation period for the council's long-term plan approaches, councillors have been discussing key topics for the plan, Clutha Mayor Bryan Cadogan said.

''We can see that the tarsealing of the Nuggets is desired by certain factions. Is it enough to be a priority higher than, say, tarsealing of an urban street in the district that has ratepayers living on it?'' the Mayor asked.

Carmen Fluhr and Jens Hoffmann, of Germany, agreed Nugget Point was a nice stop on their tour of New Zealand but did not agree on the quality of the road yesterday.

''It creates an atmosphere, but for me it's a bit scary,'' she said.

The Otago Daily Times approached several visitors using the road yesterday but found no consensus on whether the road needed upgrading.

A ''transportation workshop'' was held on November 26, during which the sealing of the road was one of nine points of debate, council chief executive Steve Hill said.

However, he said no final decisions would be made until the public had a chance to share their views.

The council spent about $14 million a year on the district's roads but the financial assistance from the Government was shrinking, he said.

In the past, central government had contributed 61% of the council's roading budget; now, that was pegged to drop to 59%.

The district had the third-longest network of local roads in the country, he said, and of the 3000km of roads, only 850km were sealed.

''With resources needing to stretch further, money needs to be spent on roads where ratepayers will get the best bang for their buck,'' Mr Hill said.

The sealing of the road to Nugget Point would require part funding from the Southland District Council and NZTA approval, he said.

The council also discussed whether to: reduce spending on sealed roads; make no major changes to unsealed roads; fund depreciation for bridge repairs and replacements depreciation at the current level; include funds in the 2015-16 budget for further work on areas held over from the Balclutha main street upgrade, such as the town hall area; and whether to proceed with a business case for changing to LED street lighting.

Staff would bring these questions back to the council for its December 18 meeting, Mr Hill said. A draft plan and consultation document would not be approved until 2015, he said.