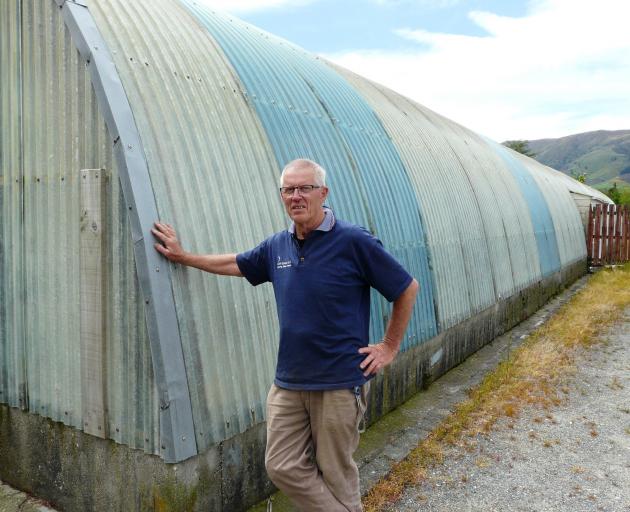 West Otago swimming pool management committee chairman Murray Harris says the end this month of five years’ of fundraising for its new pool complex is a credit to the community.PHOTO: RICHARD DAVISON
A 100% cost blow-out is a passing cloud with a visibly silver lining, leaders of a rural swimming pool project say.

Work on the West Otago Swimming Pool in Tapanui began this week, and a total price tag of $777,237 is more than double the original project estimate of $360,000 when fundraising began in 2014.

Project chairman Murray Harris said his committee, and the wider West Otago community, had shown "determination and dedication" to get the project over the line, despite several unexpected challenges along the way.

What had started as a simple recladding project had become an extensive rebuild and upgrade of the twin pool complex, he said.

"Originally, we had just expected to conduct some repairs to the pool's arched plastic cladding, which had deteriorated over the years. However, as it became apparent the pool would also need to meet changing building regulations, we decided to add a number of improvements proactively to the project, to save time and money in the long term."

Adaptations to the original brief included facilities and accessibility upgrades, fire compliance, and improvements to the heating system.

A further "curve ball" was thrown at the committee in November last year, when the Ministry of Education flagged additional health and safety precautions relating to the pool's roof.

Those requirements - for a "trafficable" roof to support planned or incidental climbers - had led to a decision to fully re-roof the complex in a "barn-style" shed, Mr Harris said.

This had largely been compassed within budget, although about $65,000 remained to be raised.

The extra expenditure would mean a better overall facility than originally planned.

"Although, on the face of it, it looks like the project has become quite costly, we believe it will be money well spent, and the community will be getting lasting value for every dollar spent," Mr Harris said.

People were now looking forward to donning their togs for the facility's grand summer opening in mid-November.

"The community has raised more than $190,000 towards this project.

"That's an achievement of which it can be justifiably proud."