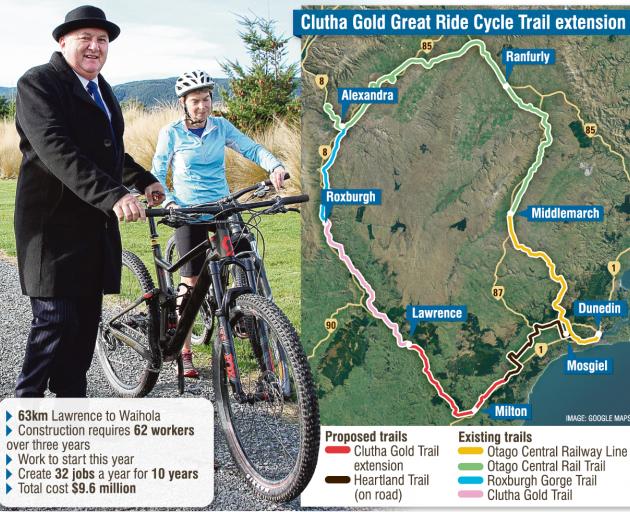 A $6.5million grant, announced yesterday by Regional Economic Development Minister Shane Jones, will go towards a 63km extension of the Clutha Gold Great Ride Cycle Trail, extending it from Lawrence to Waihola.

Dunedin and Cromwell will also benefit from a series of smaller grants, largely for feasibility studies for future projects.

Construction of the cycle trail, which extends a trail that begins in Roxburgh, is expected to start later this year and will take 62 workers three years to complete.

In the first 10 years of operation, it is expected to create an average of 36 jobs per year.

The total cost of the trail will be $9.6million funded from the PGF grant, a Government's Cycle Trail Enhancement and Extension Fund grant of $1.5million and fundraising and donations.

"It would be really good for us and I think it would be great for the whole district. It should bring a lot more people through."

Asure Accommodation operator Robbie Philip, of Milton, said it was great news and would be a "huge" benefit to the whole town.

Clutha Mayor Bryan Cadogan said to be able to work with the Government to realise the dream of the cycle trail was a tonic to not only Clutha, but the Otago region.

"Thanks to the PGF we will now have an exciting cycle experience linking Queenstown to Coastal Otago and creating a whole new experience for tourists and locals alike."

It showed a tangible link between heartland New Zealand and central government and a clear message of support for key projects that enabled the South to take advantage of opportunities that otherwise would never come to fruition, he said.

Mr Jones said the Clutha district had a "depopulation problem", and this kind of development was important to keep people from leaving.

He was also optimistic about the level of use the trail would receive.

"The South Islanders I know are very hearty, very hard, and they use their outside environment a hell of a lot more than people do in Auckland, that's for sure."

He was keen to see work start on the trail as soon as possible, and Clutha Gold Trail Charitable Trust chairman Murray Paterson was optimistic about the timeframe for constructing the trail.

"There is a lot of consultation to go through. Realistically, it's hard to see it being finished within two years ... but we certainly would like to be finished by the end of next year."

The Clutha district would also benefit from a $218,000 PGF investment to build a slip lane off State Highway 1, allowing the newly established Rosebank Industrial Park to meet traffic demands and expand.

This could lead to five to six new jobs and up to 35 jobs over five years if the project goes into production, Mr Jones said.

A further $20,000 investment would go towards an economic impact assessment on the establishment of an adventure park in Cromwell.

There was also a PGF grant to support Otago to build a sustainable construction workforce through a $250,000 investment to undertake modelling on current and future workforce training and supply requirements.