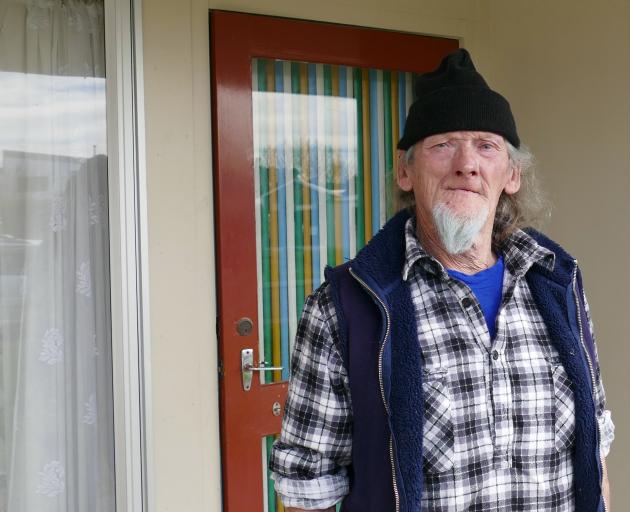 Clutha District Council Owaka community housing tenant Kevin Corby says an anticipated 90% rent increase will leave pensioners like himself struggling. PHOTO: RICHARD DAVISON
Council tenants in Owaka are calling for a meeting with officials to discuss their anxiety over rents, which are expected to soar by as much as 90% next year.

Figures for the proposed rent increases for the council’s 97 community housing units were provided in a report during its meeting last week.

The report forms part of the council’s rental review for the units, which provide housing for lower-income residents, including many pensioners.

Kevin Corby (65) is one who lives in the hardest hit block of units, in Burns St, Owaka.

Rents elsewhere in the district will go up by the same $12, equating to a minimum increase of 9% depending on current rates.

Because the council must comply with the Government’s healthy homes standards (HHS) by July 1 next year, the report says, this means the Owaka single-unit rent will soar to $173 a week (up 90%), to make the units, and any refurbishment, self-funding.

Rises elsewhere would range up from about 14%.

Mr Corby said this would "hurt" some residents, and needed a rethink.

"Anyone on a pension or benefit, this will hurt them. We’ll have pensioners in poverty, and unable to feed themselves."

He said he understood the need to upgrade the units, which he described as "damp and freezing" during winter, but questioned the wisdom of burdening those least able to afford it with the cost.

He said although Catlins ward councillor Dane Catherwood had visited the units to assess the situation, his counterparts had not.

"I’d call on all councillors to come down here and have a meeting with us, talk face-to-face, and make up their own minds on the sense of this.

"How’s a poor old pensioner meant to make do?"

Councillors discussed the proposals during last week’s meeting in Balclutha.

Cr Alison Ludemann said she did not believe ratepayers should subsidise community housing.

"I think [rents] need to go up to reflect market rates at present. If we’re to bring units up to [HHS] standards, we need to charge accordingly."

Mayor Bryan Cadogan acknowledged the need to meet required standards, but questioned the ability of tenants to pay.

"I’m proud we have a haven for those who need it, but to pass the cost of Healthy Homes Standards on to tenants who can’t afford it is simply unfair."

The council voted for the interim blanket rent increase of $12 a week by 13 to one. Deciding on further rises was deferred.