A classic 1959 Karrier Gamecock fire truck rolled into Lawrence recently, and has been putting a smile on people’s faces ever since.

Bought online and ferried down to Lawrence in an "epic" road trip by six friends last weekend, the big red engine’s owners have christened themselves the (highly unofficial) Lawrence Gamecock Fire Service.

Two of the group — including Tim Dickey — are bona fide firemen, but they say the appliance was bought purely in a spirit of fun, and to share with the wider community.

Mr Dickey said the adventure began earlier this month during a night in a local hostelry, the Coach & Horse Inn.

The group were having a drink or two together, and surfing online, and spotted the old fire engine.

"Well one thing led to another and, before we knew it, we were $4000 worse off, and heading up to Napier to pick it up." 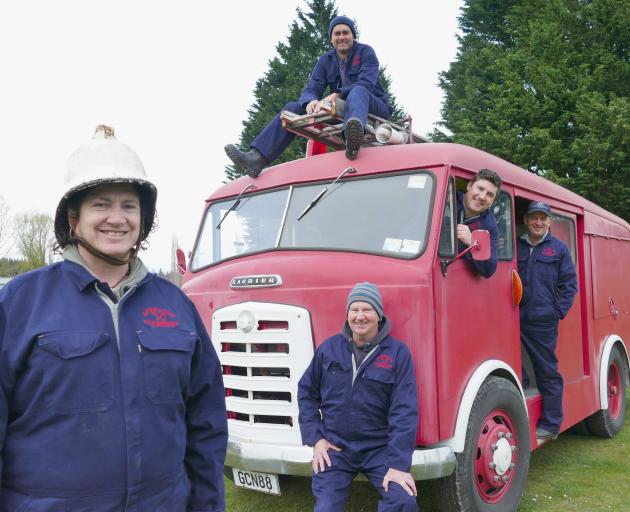 The group were the fifth owners of the 3.6-litre, petrol-driven V6, which started life in active service in Waimate.

"It was the Waimate fire engine for several years from 1962, during which time they rolled it once, and set it on fire twice, apparently.

"The brigade there gave us a pretty good reception when they saw it motoring back in during our road trip."

An agreement had been made to lend the Gamecock back to Waimate for the brigade’s 150th jubilee in 2026.

It would also feature at several Lawrence community events this summer, and into the foreseeable future, Mr Dickey said.

"We want to share the fun — it just seems to put a smile on people’s faces wherever we take it, so we’re expecting kids of all ages to want to have a ride when we wheel it out."

Residents would be able to inspect the truck during its debut at the Lawrence Lantern Festival next Friday night.

In "surprisingly good" condition, given its age and outside storage, the truck had borne the group safely southwards on its recent 1100km road trip, which took five days cruising at about 75kmh, he said.

"First thing we did was buy a couple of squabs and bean bags for the back, which made it pretty comfortable.

"It needs a bit of TLC now, but we’ve got plans to give it more of a polish up so it’s fit for service once again."