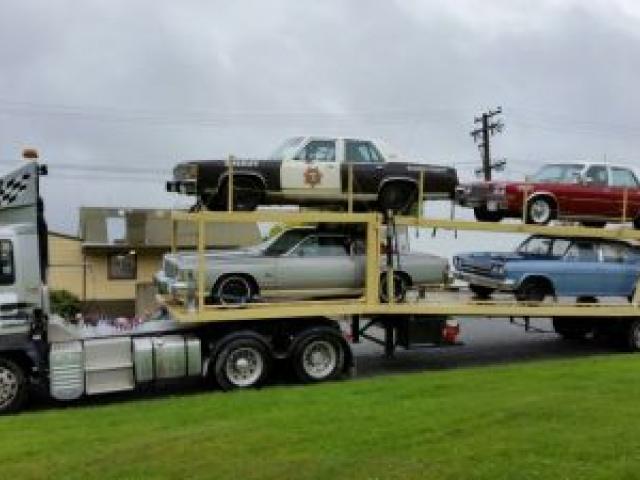 American cars made their exit from Tapanui yesterday as film crew rushed about town clearing out props and taking down signage. A month of filming Pete's Dragon in the West Otago town finished yesterday with a half-day shoot at the old Blue Mountain Lumber site. Photo by Sandra Allen.
Tapanui's Hollywood fling is over.

Yesterday, the crew of Walt Disney film Pete's Dragon did half a day's filming and then packed up the fictional town of Millhaven, Douglas County, and said goodbye, wrapping up production in West Otago.

West Otago Community Board chairwoman Barbara Hanna said it would be sad to see everyone leave.

''I think people will feel a bit lost, really.

''There's been so much activity going on. Every day there's been something happening. I think it's going to be hard to revert back to Tapanui again.''

Farryn Crawford, who co-owns Top Nosh cafe on Northumberland St with her business partner Alisha Haskins, said she would keep dining booths, photos of the cast who frequented the cafe and signed vintage cake plates the cafe used for desserts, from her cafe's Hollywood turn as The Yellow Diner.

Tapanui Hammer Hardware owner Sandra Allan said she would not mind if the crew forgot the American flag that has hung outside her store, which would appear in the film as Millhaven Hammer Hardware.

And somewhere in the United States, perhaps, cast would be taking a memento of West Otago with them.

Film crew came into her store and bought reusable shopping bags, with the names Tapanui, Kelso, and Heriot printed on them, for the cast.

She thought the crew enjoyed Tapanui even though it was ''raining like razor blades'' during the last bit of filming on Wednesday.

''I don't know what I imagined it was going to be like, I thought they would keep to themselves more, but no, they haven't. They've just mixed and mingled with the town really easily.

''It has been two months of buzz. We're going to find it very quiet afterwards.''