Spoon lost for a century comes home to Tuapeka 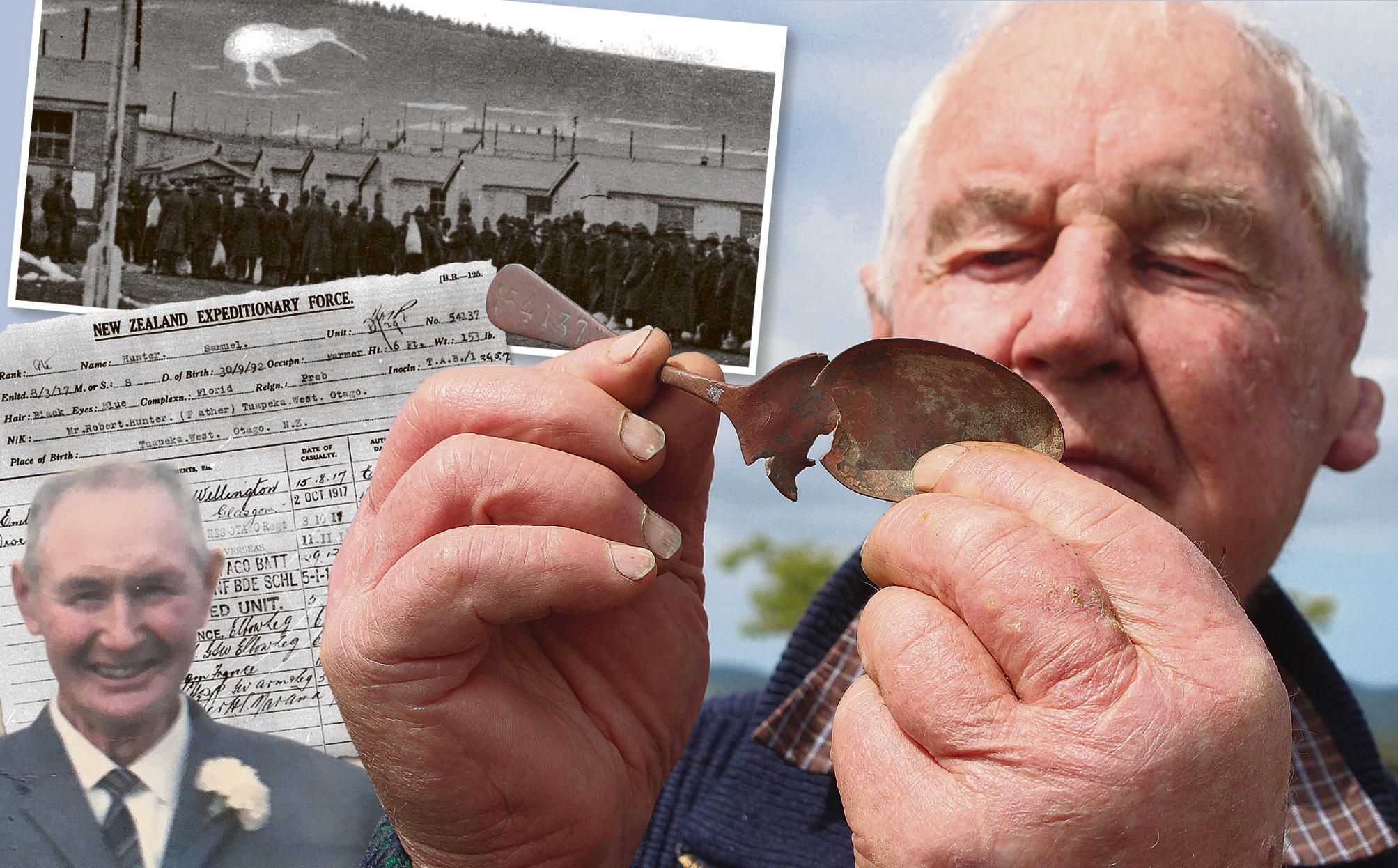 Bevan Hunter (86), of Stirling, with a spoon found in the ground at a former military training site in Somerset, England that was traced back to his father, Samuel Hunter, who fought in WW1. Left from top: Sling Camp on the Salisbury Plain where Pte Hunter trained, service records of Pte Hunter (who is pictured at bottom left). Photos: Samuel White/Alexander Turnbull Library
After 100 years lost in a field on a farm in southwest England, a rusted and broken metal spoon has travelled more than 19,000km back to  its  home in  South Otago.

The spoon was found in a field on a farm at Vagg Hill, near Yeovil in southwest Somerset, in August.

Farm owner Clive Palmer, said his friend, who spent his spare time metal-detecting, was  searching  a field on his farm.

He unearthed a copper- and silver-plated spoon. Knowing the field on his farm had  been used for military training until the early 1900s, Mr Palmer suspected the spoon may have belonged to a soldier.

The spoon had the number 54137 inscribed on it. A search of military records led Mr Palmer to a New Zealand soldier called Samuel Hunter.

The records indicated he lived in Tuapeka West, near Lawrence, and returned home  in 1918 after being  wounded in France.

From there, the hunt was on to find the  owner of the spoon, Mr Palmer said.

He made contact with the West Otago Vintage Club  to see if anyone in the area was able to find the descendants of Pte Hunter, who after returning home resumed  farming at Tuapeka West, married and had five children. He  died in 1974. Pte Hunter’s  son Bevan (86) and grandson Graham (56) were found to be still living in the area.

The spoon was sent to South Otago, travelling the 19,000km distance via post, and Bevan Hunter, who now lives in Stirling, is looking after it until the family decides what to do with it.The spoon’s discovery was a great surprise, he said.

"I was quite excited when I heard about it."

Having something from so long ago linked to his father was the last thing he ever thought might happen.

"I was quite interested to think this spoon was found and belonged to my father."

He had no other items or memorabilia from his  war years, though some of his four siblings had medals awarded to his father. Graham Hunter, who lives at Tuapeka West near his grandfather’s old farm, said it was "amazing" to have the spoon returned home.

His father said the spoon, which was in two parts, could be repaired.