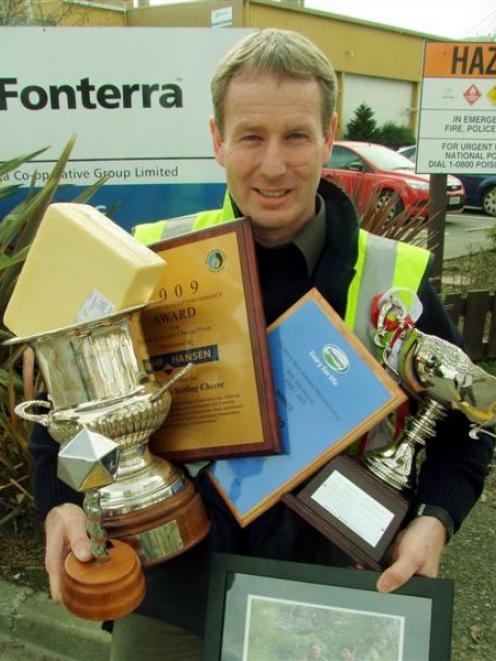 Not only did the South Otago factory record its second largest season this year but it reported its biggest haul of trophies and awards.

Site manager Mark Leitch said the wins were just rewards for steady growth and improvements achieved since the plant's capacity was significantly upgraded in 2001.

"The staff are understandably proud that they also collected a significant number of awards across a range of categories for their efforts," he said.

A major coup was winning the New Zealand Institute of Food Science and Technology award for cheese quality - an award that has been won by the Stirling factory five times in the past seven years and a total of seven times since 1996.

It also won the Japan Cup for the first time this year.

In a transtasman tussle, the plant wrestled back the Phage Trophy from a Tasmanian factory which won it last year.

Mr Leitch said this award was a sought-after trophy in the cheese fraternity.

It is awarded on a plant's ability to prevent bacteriophage (viruses that destroy cheese starters) from entering the critical processing environment.

The factory also earned its 26th health and safety award while its environmental performance was recognised with a sustainability award for its newly commissioned $12 million membrane plant that virtually transforms wastewaters into "clean" water that is then discharged into the nearby Clutha River.

Capping off the haul of trophies and awards was receiving a bronze medal from the British Nantwich international cheese show for a low-salt cheese.

Mr Leitch said the secret to Stirling's success was the "enthusiastic engagement" of its staff in its bid to be Fonterra's first "world-class" manufacturing site.

"This is a fundamental strategy for Fonterra to increase its competitiveness in a largely commodity business.

"The team at Stirling understands that many challenges are ahead for them . . . but are committed to ensuring that Stirling achieves its goal and continues to make a significant contribution to the local economy and be recognised as the jewel in the crown of Fonterra."