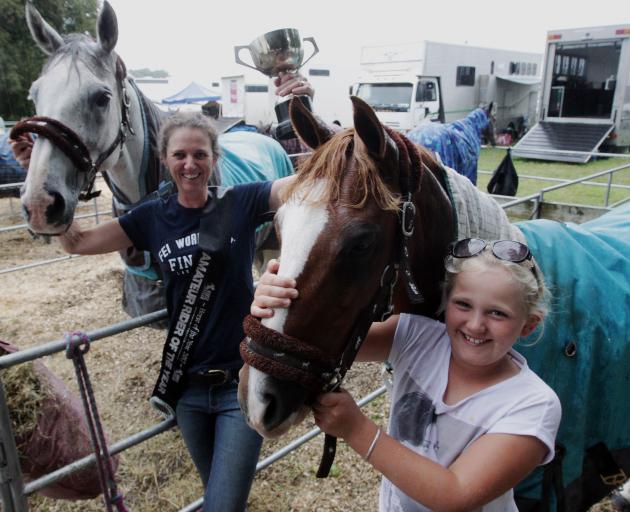 Abby Hore (left), of Beaumont Station, relaxes with her daughter Jess Hore after winning the amateur rider of the year title at the Horse of the Year show in Hastings. Photo by Paul Taylor/Hawkes Bay Today.
Beaumont station runholder Abby Hore has won a national Horse of the Year title, and says the victory is all the sweeter for winning it on a horse she bred herself.

Mrs Hore won the amateur rider of the year title at the Hastings event this week on a 10-year-old gelding, Beaumont Geldolf.

She bred Beaumont Geldolf on Beaumont Station and said it was a team effort with a ''great horse''.

''He's very reliable and very consistent and gives his best all the time. He's a cool dude.''

Mrs Hore (41) has been riding horses since she was about 4 and lives on Beaumont Station with her family, farming sheep and beef. Horses are also bred on the station, some for mustering on the station and others for sale.

The amateur rider of the year title in Hastings was the culmination of a year-long series of points-based regional events run by the New Zealand Equestrian Federation, Mrs Hore said.

She said she was ''thrilled'' with her win, and also ''really proud'' of her daughter Jess (9), who also attended the Horse of the Year event, competing there for her first time.