Time for a bit of town spruce up, resident requests 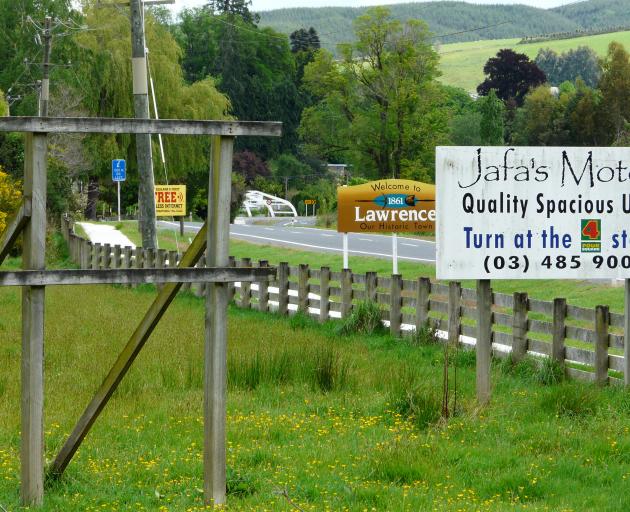 Lawrence resident Simone Budge wants to see "excessive" signage provision at the southern entry to the town tidied up. PHOTO: RICHARD DAVISON
A Lawrence resident has called on the local community board to "maintain our house" by addressing a lack of civic maintenance and cohesive branding for the town.

The written appeal was presented as correspondence to the Lawrence-Tuapeka Community Board during its inaugural meeting of the new triennium on Wednesday afternoon.

Despite its colourful descriptions of the town's deficits, Mrs Budge said her letter was intended less as criticism and more as a spur to action for those, like her, who cared about their home town.

"With a new board in place and a community plan looming, I believe this is the right time to bring things to light and get some action," she told the Otago Daily Times.

"The [Clutha Gold] cycle trail extension is coming through soon, and we have a window now to tidy things up, put the necessary infrastructure in place and create some cohesive branding and signage for the town to continue to make us an attractive destination for tourists."

Clutha District Council will begin its latest round of consultation on the district's future in January, under the "Our Place Lawrence" community plan.

Council chief executive Steve Hill suggested any proposals arising from the letter should be included in a board submission to the consultation process, allowing them to be funded as part of the plan.

In the meantime, "urgent" maintenance issues could be submitted as council service requests.

"[Council wouldn't] usually invest in capital works before consultation has occurred, in order not to waste money. But this is a golden opportunity for public input to shape future investment in your town," Mr Hill said.

"I think we'd all agree things need a bit of tidying up," Ms Foster said.