Getting married on the same day as your twin sister is not without potential complications.

Balclutha couples Diana and Gilbert Tweed and Deanna and Robin Benington celebrate a shared 60th wedding anniversary today, but despite the better halves being non-identical twins, confusion has been known to reign when telling them apart.

The pair of pairs enjoyed a double wedding - with three sets of guests - at St Mary's Anglican Church, Kurow, on May 23, 1959, and will mark the occasion of their 60th with a family pot luck dinner tonight, followed by a grander affair on Saturday.

But in 1959 such was the similarity of the 20-year-old brides-to-be, nee Blair, that even their young courtiers had to perform the occasional double-take before settling on a partner. 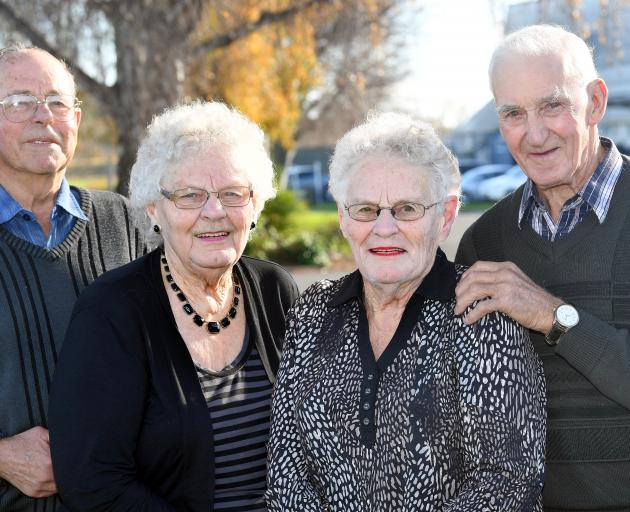 Balclutha twins Diana Tweed (right) and Deanna Benington, and their respective husbands Gilbert and Robin, celebrate a shared 60th wedding anniversary today. Photo: Stephen Jaquiery
''We'd all been going along for a good few years as, for the most part, courtship was limited to weekend dances. The girls' father, Jack, was a railway man, so he moved about all the time. I tell you we got through a fair few tyres in those days.

''But we kept on, and eventually Deanna and Robin set a date. Well, Diana and I just thought we'd better tag along.''

''There was plenty to think about, with a hard frost in the morning and guests from all over, but at least Gilbert and I had an infallible plan at the altar.

The high jinks continued into the honeymoon, despite the grooms' best efforts to thwart some of the smellier traditions of the day.

''Well, we knew our cobbers would be lining up some fun and games for the honeymoon departure, so we arranged with Jack to put the cars away in the station shed,'' Mr Tweed said. 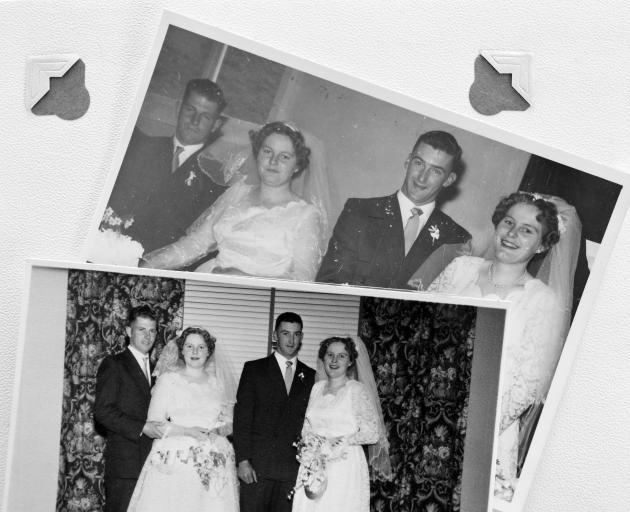 Robin and Deanna Benington (left) and Gilbert and Diana Tweed on their wedding day in Kurow, May 23, 1959. Photo: Tweed & Bennington Families
''Trouble is, I think he must have been in on it, because when we arrived something wasn't quite right.''

The newlywed Tweeds were surprised, on their arrival in Timaru, to be approached by a stern-looking policeman.

''He said, 'Do you know there's something dragging under your car, sir?'

In Waimate, the Beningtons had not fared much better.

''Sardines on the engine, and suitcases full of confetti. We had to kick it all under the hotel bed.''

Despite that inauspicious start, both couples were destined for long, fruitful and happy lives together.

The Tweeds went on to have three children, nine grandchildren and soon-to-be 13 great-grandchildren, and the Beningtons four, six and three of the same.

On retiring to Balclutha from Christchurch in 1999, the Tweeds looked ''by chance'' at a Centennial Ave property, only a few doors from the Beningtons.

''It was the first place we looked at, but we thought, 'We can't just go and live next door.' But we kept coming back to it, and here we are,'' Mrs Tweed said.

After 20 years as near neighbours, there had been a lot of everyday family socialising and plenty of good-natured banter besides.

''We see each other daily, and never really fall out. The youngsters all get along too,'' Mrs Benington said.

''When we were driving round the country after the girls back then, I think we sometimes wondered if it was us two courting each other,'' Mr Tweed said.

Mr Benington flashed a smile: ''Easy to get confused when you're dealing with twins.''