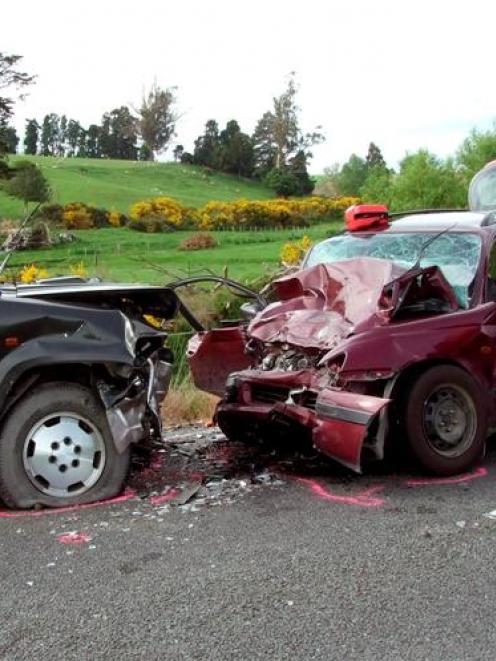 Constable Logan Dickie, of Balclutha, marks out the scene of yesterday's fatal collision near Romahapa yesterday. Photo by Rachel Taylor.
An 83-year-old woman died yesterday after the car she was driving crossed the centre line and collided with a four-wheel-drive vehicle on the Owaka Highway near Romahapa.

Sergeant Martin Bull, of Balclutha, said the dead woman, who was travelling towards Owaka had collided with the other vehicle, coming from Owaka.

"There is some speculation she was passing a campervan," he said.

Police said the woman crossed the centre line, colliding with the northbound vehicle which was being driven by a local 16-year-old boy.

The teenager, who received chest and facial injuries, was flown to Dunedin Hospital and was in a stable condition last night.

Balclutha police would like to speak with anyone who witnessed the collision, which occurred about 3.30pm.

Cardiopulmonary resuscitation (CPR) was performed on the woman by the first people at the scene, including Senior Constable Murray Hewitson, of Owaka, Sgt Bull said.

She "failed to respond" and was pronounced dead at the scene.

The Dunedin serious crash unit was called out to perform a scene examination, and the case would be referred to the coroner, Sgt Bull said.

There were no impact marks in the south-bound lane, he said.

"All the marks were in the north-bound lane, but we don't know the reason why she would be in that lane at this stage."