Hannah Johnston, formerly of Maitland, begins the 70km kayak stage of the longest day event, at the 2018 Coast to Coast. Photo: Supplied by Hannah Johnston
Hannah Johnston’s passion has taken her all over the world. The former Gore High School head girl pulled on the running shoes and started competing in ultramarathons at any chance she could get. The Ensign sports reporter Kayla Hodge caught up with her in this postcard home to hear about her adventures at home and abroad.

Q: What is your connection to Gore?
A: I grew up on a farm at Maitland and lived there until I left the area for university. I went to Maitland (which then became Willowbank) primary school, on to Longford Intermediate, and then five years at Gore High. I loved netball and, like many other young girls, had dreams of becoming a Silver Fern. There were some great role models in the days of the Southern Steel — the likes of Lesley Nicol, Bernice Mene, and Adine Wilson. And I think my memory serves me right in saying I was co-captain of the Senior A netball team. But the desire for Silver Fern glory petered out as I grew up and I never made it further than southern rep level. I also enjoyed a few years playing basketball and rugby too for Gore High. I was head girl in 2006. Ireally enjoyed that year — I got to know more of my year group better, was forced out of my comfort zone at times, and had fun working with the head boy, deputies and prefects.

Q: What led you away from the area?
A: I was relatively good at maths and science at school so after year 13 I packed up a couple of suitcases and tootled off to Christchurch to study towards (and complete) a bachelor of engineering in natural resources. The only options I saw at the time for studying engineering were either in Christchurch or Auckland. Auckland was just a bit too far from home for me. 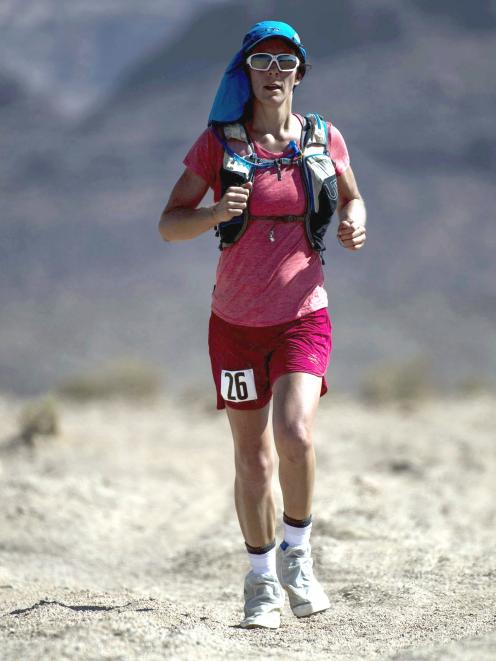 Hannah Johnston competes at the Ultra-X Marathon in Jordan, during the midday heat in the Wadi Rum desert. Photo: Supplied by Hannah Johnston

Q: What have you been doing career-wise since then and what led you to that field?
A: I discovered at university I had a fascination for fluid dynamics — how water moves and flows in rivers, oceans, open channels, and pipe systems. I still wanted to somehow be involved with the agricultural sector so approached an irrigation company to ask a few questions. It seemed like a logical way to combine these two interests. Ultimately I ended up working for that company for a couple of years as a design and sales engineer. I've worked in the irrigation industry since leaving uni, doing design work for all kinds of irrigation, from on-farm systems to large irrigation scheme projects.

Q: You have been involved in ultra­marathons; how did you get involved?
A: In October I completed a five-day, 250km ultra-marathon through the Wadi Rum desert in Jordan. It's a stage event so there is a certain distance to run each day. You arrive at camp, and recover for the next day. And yep, that averages at over a marathon each day! For this event the longest day was 70km and the shortest was 30km. It was hot (at least 40degC each day) and lots of kilometres of soft sand. The event organisers set up big shared tents and supply water, and you have to bring the rest — food, clothing, gear, sleeping bag, and your running legs! I never imagined myself participating in an ultra­marathon like this. About six years ago I started mountain biking and doing a few events. This led to running. Then swimming. Then kayaking. It all really snowballed from there. I've raced numerous triathlons and multisport events so have built a pretty solid endurance fitness over the years. I won the entry to the ultra-marathon in Jordan. The link to enter came up on Facebook earlier last year. It was the idea of an adventure in Jordan, not the ultra-marathon itself, that caught my attention. My friend Caleb and I had talked about a hiking or bike-packing trip in Jordan. He was tragically killed in a recreational accident last October and I thought ‘‘I have to enter, he would love for me to do this’’ . . . so Ientered, and a month later I'd won an entry to the event.

Q: What big events have you competed in around the world?
A: This was only my second event overseas. There's such a great selection of events in New Zealand that I haven't felt the need to go too far afield just yet. My first experience racing overseas was at the XTERRA off-road triathlon (ocean swim, mountain bike, trail run) world champs in Maui, Hawaii in 2015. You have to qualify to compete here and I'd qualified by winning my age group at the XTERRA Motatapu event held in Arrowtown. Travelling with my mountain bike, having to be super organised with all my gear, and competing in the heat were all new experiences for me. When it came to racing I had no idea what to expect, so as a result hadn't put any pressure on myself to perform, and had the best fun I've ever had racing. We have some big events here too that I've competed in — the Coast to Coast, Red Bull Defiance, Spring Challenge and The Pioneer.

Q: Are there any standout moments from events you've competed in?
A: There isn't just one I can pick! Almost every event has a standout moment. The great thing about the off-road triathlons, multisport and endurance events is that you often go to places that you otherwise would never see.

Q: What made you want to get involved?
A: I'd played netball for as long as I could remember and once I'd left uni and started working I realised I now had the time and money to go away adventuring on the weekends. I was also ready for some new challenges. I was lucky to have a couple of incredible friends who inspired and helped me to get started mountain biking and running. Once I'd had a taste of it there was nothing stopping me — trying new things, setting bigger and bigger goals, and meeting more awesome people along the way.