The West Coast of the South Island has been hammered by rain and lightning - with 13,000 strikes recorded in 12 hours.

A series of fronts from the Tasman Sea were expected to affect New Zealand throughout the weekend, bringing periods of heavy rain and strong northerly winds to many areas, MetService said.

Our lightning detection network has picked up around 2000 lightning strikes on an active front near Fiordland and western Southland in the past two hours. Heavy rain has been recorded too https://t.co/prKU7O2R01 ^PL pic.twitter.com/xvYut5zVjK

A MetService meteorologist said in total there had been about 13,000 lightning strikes over both land and sea in the area in 12 hours, with more than 2000 in one two-hour period on Saturday morning.

It expects Southland would experience more lightning strikes today as heavy rain continues in the region.

The heaviest rain was expected in the west and north of the South Island, while strong winds were forecast throughout Central Otago, the Canterbury high country and inland parts of Marlborough.

The NZTA advised drivers on State Highways 6, 8, 8a and 85 in Central Otago to take extra care due to strong winds on Saturday.

Heavy rain and strong winds are forecast for many parts of the country this weekend. The latest Severe Weather Warnings and Watches can be viewed here https://t.co/qHyE5zhh6X ^PL pic.twitter.com/WGMFnFKs6n

MetService said a few weather stations on the coast have recorded half a metre of rainfall in the past few days and 200 millimetres more is forecast for the rest of the weekend.

A heavy rain warning has been issued for Fiordland, Westland, and the ranges of Buller and Nelson.

North of Fox Glacier is bearing the brunt of the poor weather, with Fiordland and the Nelson ranges also affected.

Western parts of Southland and the Otago headwaters have been upgraded to warnings.

A watch for heavy rain covers the headwaters of the Canterbury lakes and rivers, and now also the remainder of Southland not under warning.

The storm is slowly moving up the country and expected to reach the North Island early next week.

The sun is currently shining in Wanaka, although some rain is possible later today. The sky looks an unusual colour, probably due to smoke from the Australian wildfires https://t.co/Yjbq0jxdqz ^PL pic.twitter.com/5l8JB57hUJ

MetService says smoke from the wildfires burning in New South Wales was being carried across to New Zealand by strong norwest winds, including to Wanaka.

On the eastern side of the country there were expected to be very warm temperatures again today. 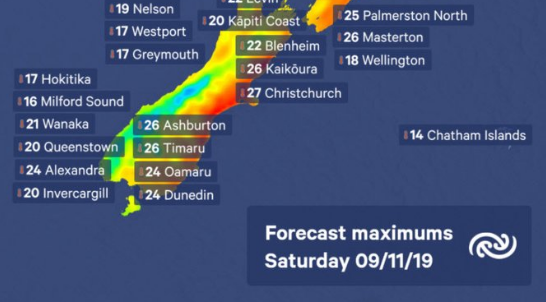 The ranges of Buller

Valid: 17 hours from 6pm Saturday to 11am Sunday
Forecast: Periods of heavy rain. Expect 120 to 180mm of rain to accumulate. Thunderstorms possible.

The ranges of Westland from Fox Glacier northwards

Valid: 22 hours from 11:00am Saturday to 9:00am Sunday
Periods of heavy rain. Expect a further 180 to 220mm to accumulate on top of what has already fallen. Thunderstorms possible.

Valid: 18 hours from 11am Saturday to 5am Sunday
Periods of heavy rain. Expect a further 180 to 220mm of rain to accumulate about the ranges on top of what has already fallen, and 80 to 100mm near the coast. Thunderstorms possible.

The headwaters of Otago Lakes and Rivers

Valid: 18 hours from 11am Saturday to 5am Sunday
Periods of heavy rain, with possible thunderstorms. Expect a further 100 to 150mm of rain within 15km east the the Divide, on top of what has already fallen.

Valid: 14 hours from 11am Saturday to 1am Sunday
Periods of heavy rain. Expect a further 110 to 140mm of rain to accumulate on top of what has already fallen. Thunderstorms likely.

Valid: 10 hours from 11am Friday to 9pm Saturday
Periods of heavy rain and possible thunderstorms. Expect a further 50 to 60mm of rain to accumulate on top of what has already fallen.