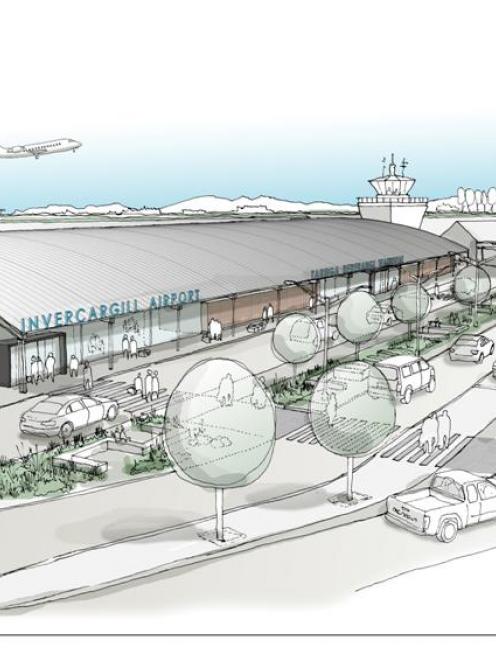 While only 11% larger than the existing terminal, the new building would have more usable space inside plus have room for expansion, Invercargill Airport Ltd chairman Joe O'Connell said at a media briefing yesterday.

The existing 50-year-old terminal was at the end of its economic life and its dated and inflexible design was ''an uninspiring reflection on Southland'', he said.

''We have had a negative customer reaction [to our facilities]. They say they are a very poor welcome and not on a par with other regional airports. The message from the public is clear and reinforces our view that doing nothing is not an option.''

Holdco owns 97.2% of Invercargill Airport Ltd after buying back the bulk of the shares of the only other shareholder, the Crown, at the end of last year.

Holdco chairman Norman Elder said Holdco would borrow the $13 million it would inject into the project. The money would be repaid by the airport company over 20 to 25 years by way of loan repayments or annual dividends.

Its decision came after the council unanimously passed a resolution in a non-public meeting on Tuesday night directing Holdco to invest. Last year, Holdco said investing in the terminal was not economically viable and might impact on the annual dividends it was able to pay to the council.

Speaking after the briefing, Mr Elder said ''while that still might be the case'', Holdco board support for the project had been unanimous because it was clear something had to be done to improve a city asset.

''The project will not affect Holdco's ability to sustain the dividend projections in the annual plan,'' he said.

However, he said Holdco's surpluses would be reduced because of the loan repayments it would have to make, and extraordinary dividends paid to the council from time to time might be affected.

At the briefing, Mr O'Connor said it was possible travellers would be charged a development levy to help repay Holdco, although that decision had not yet been made.

Invercargill Mayor Tim Shadbolt said councillors did not always give projects unanimous support but the decision to fund the rebuild through Holdco had received that.

Terminal rebuild
• New single-level building to be constructed on existing site
• $13.38 million cost funded by Invercargill City Council-owned company Holdco
• Airport company will have to repay Holdco. Development levy on passengers a possibility to help meet repayment costs
• Construction expected to begin early next year and be completed by end of 2015
• Three-part staged construction; airport able to be used throughout