By Abbey Palmer
0 Comments
As leaves fall and berries begin to change from green to blue, Southland’s only blueberry farm is gearing up for another season of hand-picked fun.

With 220 hectares of land planted in bushes, Otautau’s Blueberry Country will be opening its gates to the public this summer for the eight-week season.

Blueberry Country general manager Simon Bardon said the 10 staff members were hoping to be able to welcome visiting pickers from early January through till the end of February.

"One of the best parts of blueberry picking season is seeing all of the families out and kids knackered from running up and down the orchards," Mr Bardon said.

Many consumers were concerned about where their food came from, and it was an opportunity for people to see the origin of their fruit first-hand, he said.

While the farm was not organic, the majority of the growing process was done without the use of chemicals.

"This is not a spray-and-pray operation. There is no guessing for us — we know exactly what the chemistry of our soil is and people can see how passionate and authentic we are about what we do."

Grown on peat, the bushes were managed year-round by horticulture experts and seven frost-fighting fans to keep temperatures stable for optimal growth. 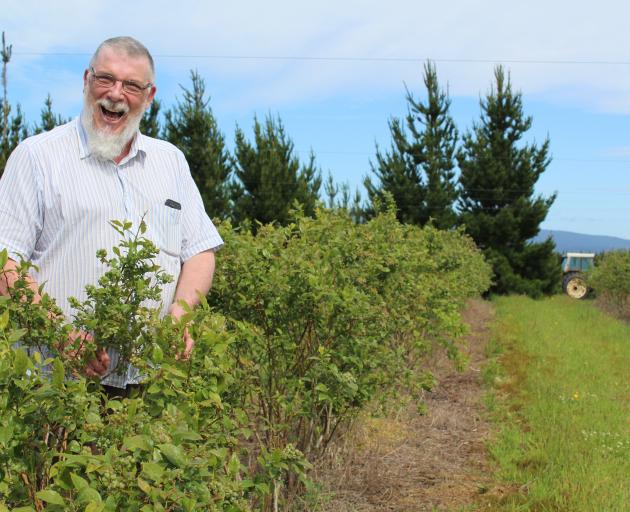 Blueberry Country general manager Simon Bardon, of Wallacetown, checks on one of the company’s blueberry orchards ahead of its busiest time of year. PHOTO: ABBEY PALMER

Owned and operated by the Furniss Family, Blueberry Country was established about 30 years ago in Ohaupo, Waikato, with two farms in Ohaupo and Ngatea.

The family then bought the Southland land where the farm is now located 15 years ago.

"A lot of people don’t know we exist here in Southland.

"We can have blueberries picked, processed, packaged and delivered to supermarkets in 36 hours during the season."

In the on-site grading house, each berry is tested for colour, size, texture and blemishes by state-of-the-art technology before being packaged.

Bushes which were not hand-picked this season, would be machine harvested and frozen for sale.

Although the company was New Zealand’s largest blueberry grower in production, the Southland orchard was still expanding, he said.

"It’s a developmental orchard, we still have 40 per cent of our acreage in grass, but it’s grass in production."

While it was "a very long way off" being a fully productive unit, he was optimistic about its future.