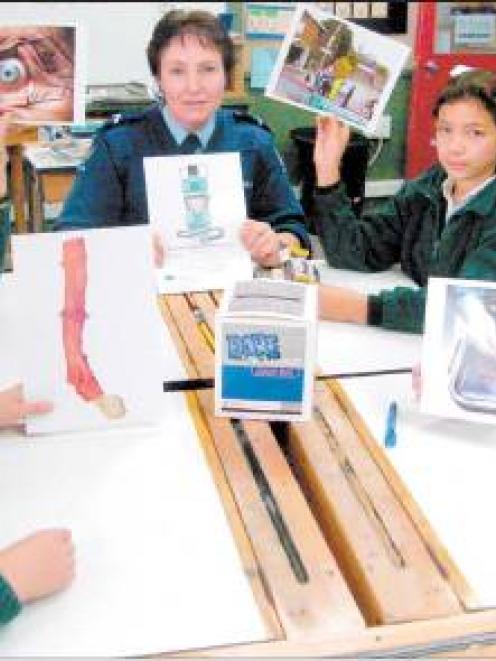 Horrors of smoking: Demonstrating some of the horrors and consequences of smoking learnt on their recent Dare programme are Longford Intermediate pupils (clockwise from left) Eleanor Davie (12), Justin Hellier (11), Justice Tainui (11) and Bradley Nicol (12), with Senior Constable Linda Graham.
Longford Intermediate School in Gore has acted quickly to deal with the discovery earlier this year of a small quantity of cannabis at the school.

Principal Keith McKenzie said the pupils concerned had been referred to the Youth Aid division of the police. The school would decide what consequences the pupils should face based on the outcome of the Youth Aid process.

Gore Police youth education officer Senior Constable Linda Graham said the police had ‘‘been through Longford like a dose of salts''.

‘‘We have run the new Dare To Make A Choice programme through the entire school.

‘‘Early indications suggest the course has had a very positive impact with the kids,'' she said.

Dare To Make A Choice is a programme that strengthens young people's ability to make positive life choices, with a special emphasis on drug use.

Snr Const Graham said the programme was totally up-to-date and focused on things the children would have been aware of through the news.

‘‘It covers drugs, alcohol and smoking.

‘‘We look at recent P-lab discoveries, the death of the girls in the Sila case in Christchurch and other relevant and up-to-date cases.''

Mr McKenzie said although drug use was a police issue, it was also a health issue for the school.

‘‘We're here to enhance their education and children with a health issue, such as drugs, need our support,'' he said.

‘‘There may also be disciplinary aspects to this, but primarily it is a health issue and we deal with it as such.

‘‘We're here to create an efficient learning environment, and anything that impairs their learning needs to be dealt with quickly,'' Mr McKenzie said.

The board of trustees was considering whether to include Longford Intermediate in random drug dog visits, he said.

‘‘We surveyed the families as to their opinions. A report has been sent to the board on this and it will be covered at their next meeting,'' Mr McKenzie said.

Snr Constable Graham said many of the high schools randomly searched by the drug dog included years 7 and 8 pupils, so it would not be new to bring the dog into Longford Intermediate.

Bradley Nicol (12) said the course had given him a clear impression that it was not good to use drugs.

Eleanor Davie (12) said: ‘‘I realised what drugs can do to people.  They can make them absolutely crazy.''